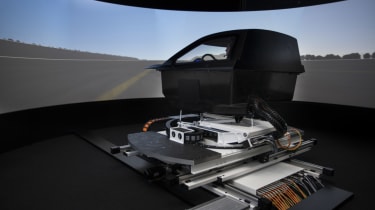 How do we make better cars? In the future, the answer could be to mke better simulators. For Ansible Motion, based at the Hethel Engineering Centre, a stone’s throw from Lotus in Norfolk, that simulator already exists.

The company claims its simulator is not just more advanced than existing alternatives, but more compact, more dynamic and more adaptable, too. The result is the degree to which Ansible says its ‘engineering class’ simulator matches the motion of actual cars. It offers simulation in the truest sense of the word, replicating the real world as accurately as possible yet ensuring controlled conditions for repeatable, scientific testing.

In theory, the new hardware also solves a fundamental problem of existing simulators. Most systems currently on the market use a ‘hexapod’ setup. This positions the driver’s pod high in the air on six sturdy hydraulic or electric rams.

While relatively good at replicating G-forces, these simulators can only do so very briefly – until one of the rams reaches the end of its travel. This limits the range of movement, too: some actions require travel in more than one direction, but if one of the supports is already at maximum or minimum extension, travel in other planes can be restricted.

Current simulators also struggle with latency – the delay between a driver inputting a command and the machine reacting. It’s a result of the large, cumbersome rams and the momentum of the pod atop them. And a side effect of all this weight is that companies installing simulators need dedicated foundations to handle the mass to prevent the whole machine dragging itself out of the floor.

Ansible’s ‘Delta’ setup started as a clean-sheet design to tackle some of these issues. Rather than a hexapod, it sits upon three stacked, sliding platforms. Visually, it’s much more compact, being lower and requiring less real estate. Practically, it’s also a lot lighter – Ansible says it can be used in any standard commercial space without modifying the foundations. 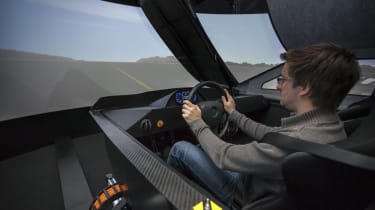 The benefit of the sliding platforms is that even at the extent of one movement – say, lateral cornering forces – the sim still has a full range of movement on its other axes for acceleration or braking, or rolling and yawing motions.

Ensconced in the car-like pod and surrounded by eight metres of wrap-around screen, the movements are initially quite convincing. For a start, the screen is large enough that you can look out of the side window and still see passing scenery – a useful touch that helps to immerse you in the experience.

In a virtual cone slalom, the way the ‘car’ reacts to direction changes, dips, dives and turns relates almost directly to your inputs, and the same applies when negotiating concentric circles, where it’s easy to induce convincing understeer and oversteer.

This benefits professional drivers, as the latency of traditional setups limits their effectiveness at testing small dynamic changes in a virtual environment. The more accurately a car’s behaviour can be felt in a simulator, the more finely it can be adjusted with software – and by extension, the more relevant the simulation will be to developing a real car, whether for road or track.

Kia Cammaerts, Ansible’s technical director, claims the increased realism helps reduce motion sickness, which is often caused by a mismatch between visual cues and the driver’s sense of balance. Unfortunately, my own tolerance for undulating motions is relatively low, and while I avoided redecorating the interior of Ansible’s pristine demonstrator unit, one particular set of twists, rises and falls did befuddle my own vestibular system enough to cause discomfort.

Ultimately, a simulator is only so accurate in its movements, and in this early stage there’s still some work to be done to truly replicate the sensations of driving. It’s getting close, though, and that can only be a good thing for streamlining the development of future vehicles.