Metro 6R4 - a gathering of Group B rally icons

We joined 6R4.net for a meet - view our gallery of 'rallying heaven' here 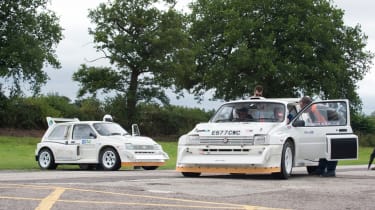 There is something about seeing a whole group of very special machines together - the recent flypasts of multiple Spitfires (with the odd Hurricane thrown in for good measure) are one such goose bump-inducing example. So, when Nicky Lindon from 6R4.net said that he had organized for about a dozen of the mighty Metros to be at Curborough for an informal gathering, and he wondered if we’d like to go, we didn’t need asking twice.

Curborough is a small sprint venue with an open paddock and no buildings to speak of, but walking in on the day of the event it looked was like a small slice of rallying heaven. There most common colour amongst those cars gathered together was white, the chunky four-square monsters as naked as the day they rolled out of the factory. Amongst these white cars was the very low mileage and stunningly original car that I drove in issue 181 of evo. 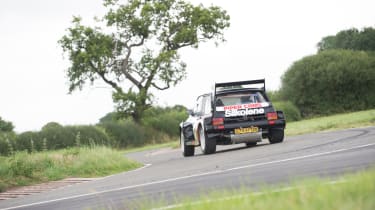 Elsewhere were a couple of examples with the Computer Vision livery of the works cars, although both were in fact running in Clubman specification. There was, however, a more powerful car in attendance and it had the names of Tiff Needell and Will Gollop on its side. This was a car that competed in the 1989 British Rallycross Grand Prix at Brands Hatch – you can see the video of the race here and it was running about 400bhp from its still naturally aspirated V6. Despite a bit of a slipping clutch it still pounded round the circuit, exiting corners impressively sideways and sounding glorious.

And then a couple of RS200s turned up – a beautiful red road car that had been owned by the same person from new and a competition car that looked suitably used and abused, or appreciated as I like to think of it. All in all it was a wonderful few hours wandering around these spectacular machines and listening to the hard bark of them being driven really rather hard around the short circuit. There are plans to do it all again next year and I certainly hope I’ll be able to go back. For now, enjoy our gallery of photos.