Ask Goodwin - Should white lines be removed from roads?

What does Goodwin think of the proposal to remove some white lines? Not keen, by the looks of things... 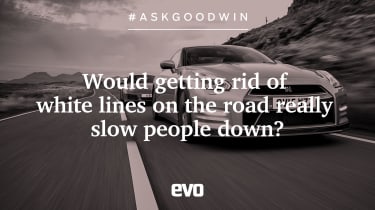 What do you think about the suggestion that white lines should be removed from roads because it slows people down? - Simon Archer, Belfast

Irresponsible tosh. It’s just an excuse for councils, and the government, to spend even less money on our roads. Already white lines on many roads around where I live are fading away due to a lack of maintenance. Can’t remember the last time I smelt the familiar smell of a propane torch burning away old white line paint.

Or is there some sense behind it? The theory behind removing white lines should appeal to me because it’s based on the idea of roads being safer when we ‘self police’ ourselves. The late Dutch engineer Hans Moderman suggested that roads were safer without loads of controlling systems such as traffic lights – indeed surveys have shown that traffic moves more quickly without them.

Certainly I’d drive more slowly on country roads at night if they didn’t have white lines down the middle, especially if I was on my motorcycle. What about double white lines? If they didn’t exist you would have to judge as to whether it was safe to overtake, rather than it being a legal issue. I can see the sense in that. Anything that encourages people to think about what they’re doing behind the wheel and also take responsibility for their own actions is to be encouraged.

Research has also shown that adding cycle lanes actually makes people drive closer to cyclists when they’re overtaking them, than they do on roads with no bespoke lanes for bikes. It’s time that there was a proper look into modern driving, commisioned by the Department of Transport and carried out by intelligent and lateral thinking bodies. Not much chance of that happening. The government has fallen in love with the concept of autonomous driving and is already chucking money at projects. Let’s have your thoughts.