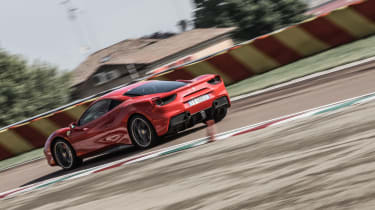 The start of my drive around Fiorano in a 488 was an inauspicious one. I’ve lost the starter button. First I attempt to look for a key to twist, then a button somewhere on the dashboard. Raffaele de Simone, a man already several orders of magnitude cooler than I (and that’s before my starter-related brain fade) gently suggests I look on the steering wheel. Ah.

Prodding a button still isn’t quite as cool as twisting a key though, is it? It’s almost impossible to do with nonchalance. And does one use an extended finger (and if so, which one?), or thumb it? I had the same trouble in a Morgan 3-Wheeler, and that at least has a bomb-switch style cover to flip up beforehand.

Truth be told I’d not mention the starter button, were it not the only aspect of the 488 that felt anything less than spectacular about its demeanour on the day. Not yet high enough in evo’s ranks that my name will come up for any Ferrari launch invitations in the near future, taking one of its cars onto its private test track feels wholly illicit.

I first became aware of Fiorano in the early 90s. Nigel Mansell was driving around the place for a video covering his career thus far, filmed just before his move to Williams from Ferrari. He drives Fiorano in an F40. In the wet. At one point, into the first corner after the main straight, his eyes widen as the tyres lock. “Having a job to stop for this corner”, he tells the audience as the wheel fights in his hands. A nervous laugh. “That was quite quick into that corner”. His eyes flick briefly to the camera. Just as well you were already wearing brown trousers, Nige.

The track has changed a little since then. For a start, it’s beautifully sunny today. A wander around some of the infield buildings - the pits, Enzo’s old house - sets the scene. The car has changed too, though it’s scarcely believable that Ferrari’s current mid-engined V8 sports car has around 200 horses more than the F40 once did. 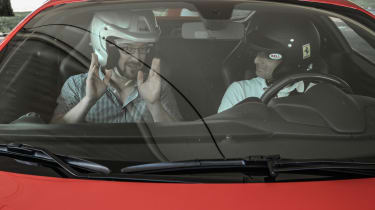 Performance is immense, but so too are the chassis’ abilities and the efforts of the E-diff, F1-trac, and other electronic systems. I’ve no doubt the 488 is a car that wouldn’t suffer fools, but rein-in your inner fool and the car impresses and flatters in equal degree.

Rushing towards the tight first corner and working the carbon-ceramics to the point of ABS chatter is far less terrifying than I expected, and if you’d told me a few weeks ago that adding corrective lock at fourth-gear speeds would be as easy in a 488 as it is at second-gear speeds in my MX-5, I’d have deemed you insane. But you’d have been right.

Such is the thrust available in small throttle openings it doesn’t take much commitment to introduce some satisfying yaw to the car’s attitude. What you lose in noise and character and a spine-tingling yowl you gain in the kind of creamy driveability that makes the 488 fun at all kinds of different speeds, and particularly so in the unfamiliar environs of Ferrari’s own circuit.

Speaking afterwards to fellow staffer Will, we both agree it’d be interesting to try some of Ferrari’s earlier wares - he settles on the 355, with its natural aspiration and open-gated manual, while I proffer an earlier V12, a 250 perhaps - to see what modern Ferraris might have lost next to those that once defined the brand. But I’d be surprised if any other car in the company’s history would be better suited for that first taste of Fiorano.