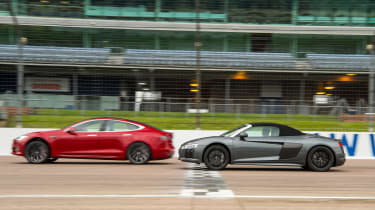 If the internet one day becomes full and there’s no space left for anything new, all we have to do is delete every video of an electric car outrunning a petrol-engined car on a drag strip. More often than not, the electric car in question is a Tesla, most likely the twin-motor Model S P100D. If you looked no further than these videos, you’d have to conclude that the P100D is the quickest motor vehicle ever to be sold to the public.

But let’s look a little further. Are electric cars really as fast as the clips suggest? What’s more, in a contest like this, can an EV ever be as thrilling and dramatic as a conventional performance car?

Tesla claims the £129,400 P100D is the fastest-accelerating production car currently on sale, quoting 0-60mph in 2.4sec. Its twin motors develop 595bhp and 713lb ft of torque. It weighs a rather corpulent 2108kg, but, with a motor working on each axle, it does have all-wheel-drive traction. 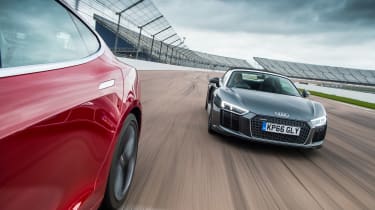 Representing the ‘conventional’ performance car today is Audi’s £132,020 R8 Spyder. Its 5.2-litre V10 makes 533bhp and 398lb ft, but at 1720kg the R8 is significantly lighter than the Tesla. The Audi also has four-wheel drive, but its naturally aspirated engine sits at the opposite end of the spectrum to an all-electric drivetrain, so in terms of the way these two cars produce their power and deploy it away from the line, they could hardly be more different.

This isn’t a full-bore performance test, with a day set aside to optimise launches, warm tyres and trim tenths of seconds from each run. It’s just two cars, a start line and our GPS-based VBOX timing gear.

The Tesla has what must be the most drawn-out launch-control procedure of any car you care to mention. You first engage the sportiest drive mode – appropriately branded Ludicrous – then hold down the same button on the huge central display for a few seconds. Eventually the entire screen explodes into a warp-speed animation, after which you’ll be shown a warning. ‘Are you sure you want to push the limits?’ it asks. ‘This will cause accelerated wear of the motor, gearbox and battery.’ Your two options are ‘Yes, bring it on!’ or, amusingly, ‘No, I want my Mommy.’ Clearly, you’re going to hit yes.

Then you sit and wait. To engage Ludicrous+ mode, the car has to warm up its battery, which can take up to 30 minutes. It’s a good job the clock isn’t running yet... Once it’s warmed through, you engage launch control by holding down the brake pedal with your left foot, fl ooring the accelerator with your right, then stepping off the brake.

With not a chirrup of wheelspin and scarcely more than a sci-fi whir from the motors, the P100D takes off. The launch is so sudden there doesn’t seem to be a period of acceleration at all. You simply go from stationary to great speed in an instant. It’s like being picked up and swept away by a silent force, a tidal wave perhaps, and you feel your eyeballs squeeze against their sockets and your brain press against the back of your skull. The sensation is so uncomfortable that it almost registers as pain.

After three or four seconds that astonishing rate of acceleration starts to fade. The numbers still fl ash by on the speedo, but the P100D feels merely fast now rather than intergalactically quick. After that first hit, you want it to build and build, but instead it just sort of fades away. It’s almost disappointing. 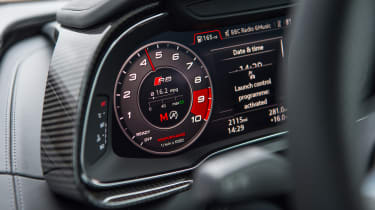 Still, the numbers are fairly outrageous, 60mph flashing by in 2.9sec. That’s half a second short of Tesla’s claim but still absurdly fast by any measure. The P100D hits 100mph in 7.7sec.

The R8’s launch control is much simpler, and whereas the Tesla is eerily quiet as it sits on the line, the Audi’s V10 wap-waps at a steady 4500rpm, sounding as though it’s about to explode. When you release the brake pedal you feel the transmission engage violently, like two trucks colliding head on. There’s the faintest hint of wheelspin and the engine strains at 5000rpm for a split second as it tries to overcome the car’s inertia, and you’re off. You flick the upshift paddle yourself – it’s faster that way – and feel the car pull with a force that seems to be sustained all the way to triple fi gures. The noise, the fury, the mechanical cruelty of it all. The R8 doesn’t match the Model S for G-forces, but the whole process is so much more dramatic.

The numbers tell an interesting story. The Tesla is quicker to 60mph by three-tenths of a second, but the Audi is ahead by 100mph, stopping the clock half a second sooner at 7.2sec. The 60-100mph times are revealing, too, the Audi taking just 4.0sec to the Tesla’s 4.8sec.

Away from the line, then, the P100D is faster than the R8, but everywhere else the petrol-engined car has the advantage. So is one type of acceleration better or more enjoyable than the other? Not really. That would be like declaring one genre of music to be better than another. If I never feel the silent, gravitational force of an electric car at full acceleration again, that will be cause for regret, but I’ll be just as gutted if I never again experience a raw, naturally aspirated engine digging deep and howling loud as it hauls a car from standstill to 100mph in a matter of seconds.