Car paint protection film – what is it and does it work?

With deep bumpers and wide arches, performance cars are particularly susceptible to paint damage. So how does paint protective film help? 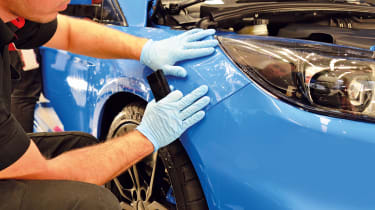 Maintaining that pristine, factory-fresh look on your car is no easy feat, but it’s possible with the right amount of TLC - and, perhaps, some paint protection film.

Paint protection film is a means of safeguarding your paint from the elements, stone chips and key marks with an invisible layer of plastic. The idea is that you save on regular visits to or from your scratch repair man by investing in a product that forms a barrier over your car's paintwork - protecting its looks and its residual value in the process.

Read on to have all your questions regarding paint protection film answered...

Paint-protection film is generally made from a tough, clear, flexible acrylic, urethane or polyurethane film. It is applied to a car’s surfaces.

What does it do?

It is designed to protect your car’s paint from stone chips, environmental contaminants, bird lime, insects, scratches and minor abrasions.

Where did it originate from?

It was originally developed for military use in the Vietnam War. It was applied to helicopter rotor blades, which were susceptible to damage.

How is it fitted?

Most installers will use templates that have been designed to achieve a precise fit for your car. The bodywork will be carefully cleaned and prepared for the application of the film and each section will be applied by hand using water and a slip solution to slide the film into position. Once the film is in place, the liquid underneath is squeezed out. Some companies wrap the film around the edge of the panel, others leave it flush with the edge.

Can it be fitted to panels with non-original paint?

Yes, it can, but if a panel has been repainted it needs to be a high-quality repair otherwise it’s possible the paint could come away when the film is removed. New paint should also be allowed time to cure fully before the film is applied. 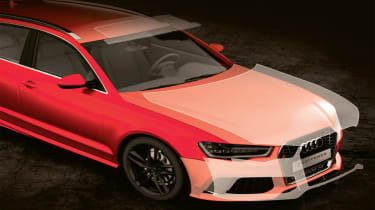 Does it cover the whole car?

How long does fitting take?

That depends on how much is being fitted. It can take from a morning to a couple of days.

Can you fit it yourself? 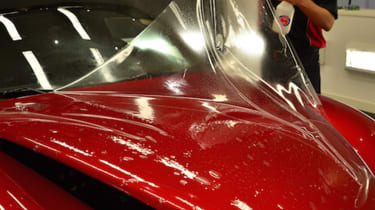 When should you get it applied?

Ideally, paint-protection film is applied when a car is new, before it has suffered any wear and tear.

How do I look after it?

Wash your car in the normal way, although if you use a pressure washer, care should be exercised. After washing, the film can be polished or waxed, just as you would a painted surface.

What is it gets damaged?

You can easily peel off the damaged piece – a bit of gentle heat from a hairdryer will make this easier – and have a new section installed.

I've seen self-healing films mentioned - what are these?

Most film has a self-healing layer. Scratches that don’t penetrate this layer disappear when the film gets heated by the engine, sun or warm water.

I’ve seen cars with film that looks yellow and nasty - is this normal?

When paint-protection film was in its infancy, the film or gel used underneath it could deteriorate over time leading to the discolouring. However, the quality of film has improved over the years, so this is no longer the problem it once was.

How much does it cost?

It varies depending on the complexity of your car’s body. Prices start at around £400 for a front bumper and rise to over £5000 for an entire car.