50 years of Hot Wheels - a history, the cars and the brand

From the wacky to the wonderful, 50 years on Hot Wheels is still hot stuff 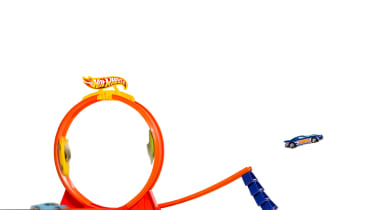 Volkswagen, contrary to what you might have read elsewhere, is not the world’s biggest car maker. True, it may have produced 10.7million cars in 2017 – enough to put it ahead of Toyota and Renault-Nissan – but there’s one company, celebrating its 50th anniversary on 19 May, that can match that figure virtually every week.

I’ll not draw out the analogy too much longer as the images on this page will have given the game away somewhat, but just as Lego makes more rubber tyres than any other company on the planet, so Hot Wheels can stake a pretty good claim to being the world’s largest car maker.

Gimmicks aside, is it a company deserving of space in evo? Absolutely. Ahead of even Scalextric, Tamiya, or videogames such as Gran Turismo, the brand has served for many of us as the first step into that long journey to becoming a petrolhead. You might not remember your first Hot Wheels car (or perhaps your first Matchbox car; the British brand was bought by Hot Wheels owner Mattel in 1997), but from the moment you were old enough to grind them against the skirting board rather than attempting to swallow them, the little diecast models were acting as your first point of reference for automotive colour, style, brand and – on some level, at least – driving fun. 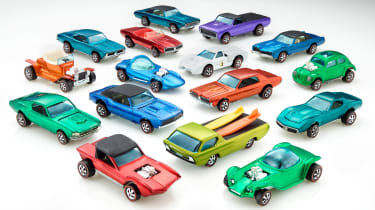 Hot Wheels was the brainchild of Mattel founder Elliot Handler, whose wife Ruth had, in 1959, created that other mid-century toy icon, Barbie. First mooted in 1966, the idea behind it was to create a new and exciting way for kids to experience ‘vehicle play’ and the thrill of the custom hot-rod culture that defined the American automotive landscape post-war. It was Handler who coined the name, too. Remarking on the design and the speed at which one of the prototypes rolled along the floor, he was said to have exclaimed: ‘Those are some hot wheels!’

This idea spawned the first line of 16 vehicles that debuted in 1968, known as the Original Sweet 16. Eleven of these were the work of Harry Bentley Bradley, an automotive designer who had worked with General Motors between 1962 and 1966 and penned several designs for Detroit-based customisers the Alexander Brothers.

His most famous design, the Dodge Deora forward-control pickup, would become one of the Original Sweet 16, but the very first car produced by Hot Wheels was the Custom Camaro. Based on the brand new 1967 Chevrolet Camaro – itself hot property at the time – it was joined by other contemporary pony cars such as the Mustang, Cougar, Barracuda and Firebird. Each featured a sparkling ‘Spectraflame’ paint scheme – a coloured lacquer over a zinc-plated casting – and other unique touches that echoed the era’s car culture, such as side-exit exhausts and staggered wheel set-ups. 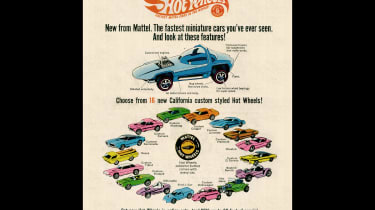 An almost endless list of iconic designs quickly followed, from the Twin Mill – a dart-like hot-rod powered by a pair of 8.2-litre supercharged big-block Chevy V8s – to the Beach Bomb, a VW camper van equipped with a pair of surfboards. Today, rare early designs can command big money: a hot pink prototype version of the Beach Bomb was bought for $72,000 by its current owner, renowned Hot Wheels collector Bruce Pascal. It’s since been valued at up to $150,000, or around half the most ever paid at auction for a real split-window VW Type 2…

Over its first half century Hot Wheels has produced a diecast of pretty much every vehicle you can think of, and with a tradition of designing complete ground-up custom models, a good few you’d struggle to even imagine. More than 20,000 different models have been created to date, and currently over 130 new car designs are introduced each and every year. A dedicated team works to render real-world cars in miniature form and come up with entirely new vehicles: it could be a branded car for one of the company’s 350 partners – everyone from motoring personalities such as Magnus Walker to big-name manufacturers – or a new variation on the hot-rod theme, or a Star Wars or Toy Story character car.

That variety is one of the highlights of the job, according to Jun Imai, who has been at Hot Wheels for 14 years and leads the transportation design team. About three-fifths of the designs the team works on are licensed vehicles replicating the kind of modern cars and classics you’ll see on the road, while the remainder are what the company calls Hot Wheels Originals, from the pop culture-themed toys to fantasy vehicles directly from the minds of the designers. 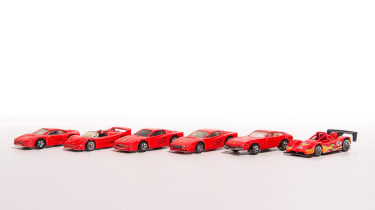 As car enthusiasts, the team take particular pleasure in replicating some of their favourite shapes in miniature. Imai’s own passion is in older Japanese metal and classic Porsches. He owns a classic Datsun 510 wagon and 260Z, and a 1985 911 Carrera, all modified, and changes Imai has made to his Datsuns in particular have inspired some of the custom 510s and Z-cars available in the Hot Wheels line-up. ‘Real-world and toys go hand-in-hand for me,’ says Imai. ‘I’ll sometimes try something out on one of my cars, and it might inspire one of my designs the next day.’

Along similar lines, fellow designer Ryu Asada has pushed several Honda designs onto the shelves over the years, and true to form owns both an S2000 and a first-generation NSX. Other members of the design team are Porschephiles, while some own and covet muscle cars. This variety heavily and unavoidably influences each year’s diverse wave of new 1:64-scale models.

This passion for cars has opened a few doors, too. Hot Wheels has formed some high-profile collaborations in recent years, pairing up with names such as Fast & Furious franchise star Sung Kang and the aforementioned Magnus Walker to create miniatures based on customised real-world vehicles.

A fan of Sheffield-born Walker since watching the cult Urban Outlaw documentary, Imai describes the collaboration that followed as a ‘very organic process’, with Walker’s enthusiasm and ideas inspiring a line of Urban Outlaw cars, from 935s and GT3s to a replica of his famous ‘277’, as driven in evo issue 209. Kang, too, is a petrolhead to the core, making the eventual introduction through a mutual friend of Imai and Kang relatively easy. The car that resulted, a pumped-up replica of Kang’s custom Datsun 240Z named ‘Fugu Z’, has since spawned several other custom 240Zs, including a take on Imai’s own wide-arched Z-car.

The process for creating non-licensed vehicles is even more fascinating. Imai describes it as a ‘different mindset’, with designers imagining not just individual vehicles but a whole world in which the cars operate, assigning different roles to different vehicles whether they’re relatively straightforward concept-style cars or… well, wheeled dinosaurs. Imai notes that the team will always design vehicles as if they’re real cars, though, with space for drivers and powertrains, however fantastical the overall shape. This is something best illustrated by the full-scale, functioning replica of the famous Twin Mill that the company built for the SEMA show in 2001. 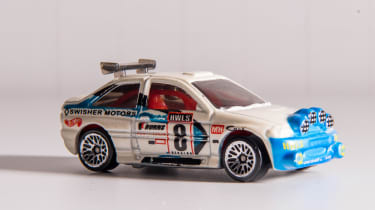 Designing the diecast cars to function is another consideration. Hot Wheels is as much known for its orange track as it is for the cars that run on it, and the size of this track has led to fairly consistent requirements from the 1:64-scale models, from standardised wheel sizes to enough ground clearance that a car can negotiate a loop at high speed. ‘It’s a bit like platforms in the car industry,’ explains Imai.

At the same time, modern production techniques have allowed designs to become more true-to-life and more complex – and Imai says that they’ve even been able to implement some of the techniques discovered by the company’s huge customising fan base to improve  castings.

Those castings will change further in response to other factors, too. Just as early cars like the Deora, Whip Creamer and Twin Mill are redolent of the era in which they were conceived, the march of modern car design and automotive trends influences the latest Hot Wheels designs. Imai says he’s particularly interested in the burgeoning market for electric cars, the way it’s allowing smaller car makers to make a bigger impact in the market, and how that affects car and toy design, as well as materials technology. ‘I’m keen to do more in terms of motorsports, too,’ he says. ‘Formula E, in particular, is super exciting – the thrill and the speed of motorsport, but a consideration for environmental concerns, too.’

Hot Wheels’ earliest days are still appealing, though. ‘I’d love to bring back some of the older cars,’ adds Imai. ‘They’re still an inspiration for us. Perhaps replicating some of our Original Sweet 16, but produced with the technology we’re now able to incorporate.’

Hot Wheels? The next 50 years should be even hotter.