Blow away the cobwebs in an Austrian flight of fancy. But which car is the perfect match for the road?

Your eyes have just about stayed open while the exits were pointed out and the donning of a life jacket was demonstrated, but now you’re taxiing towards the runway and you can fight sleep no longer. As the big turbofan engines begin producing some proper thrust you shut your eyes and then moments later the weightlessness of take-off seals the deal…

As your subconscious takes over, you find yourself pulling down a door and looking at a row of barriers over a long, low bonnet. Some sort of toll station. Just as you’re wondering if there is any money behind the sun visor, a lone red and white arm lifts upwards unbidden. Needing no second invitation you pull back on the stubby gear selector and roll forwards. Then you stop. Dreams are no time for timidity. Left foot on the brake, right foot hard on the throttle. You momentarily feel the car strain at its leash, the big, angry V8 cursing you, then you release the shackles, 622bhp firing you through the gap between the booths like a pinball heading into the machine. Welcome to the Grossglockner.

This is a car that lives up to such monumental mountain scenery but it also requires tarmac that is ripple-free, and these Austrian toll roads are as smooth as anything without grandstands and a light gantry. Despite its big nose, the car turns in with incredible alacrity, and when exiting corners there’s much more traction than you would imagine given three of the letters on the rear. 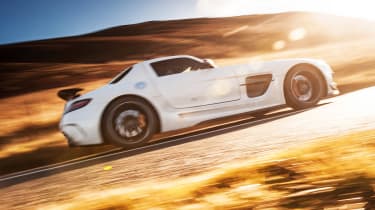 As you reach what looks like the summit you give a nod to Hermann Lang, who won the last hill climb here in 1939 in one of this car’s ancestors. Today isn’t a day for turning left up the cobbled Edelweissspitze so instead you push on, racing along a ridge with grassy slopes on either side with blue gentians and purple orchids peppering the green of this Austrian amphitheatre. All would be white in winter.

The road plunges into a tunnel and briefly your world is dark and full of an angry guttural noise as quad exhausts vent 6.2 litres revving to over 8000rpm. Then you’re back in sunshine, revelling in and leaning on the aggressive lateral grip that the chassis and Cup 2 tyres are generating. A press of one of the buttons unshackles the ESP and now you can indulge in a bit of gratuitous oversteer round two hairpins, the car displaying surprising balance once the limits of grip have been fully breached. Back into another tunnel, then a short downhill stretch, before taking the first exit on a small roundabout.

Now off the High Alpine Road, you’re climbing again, up towards the mountain from which the road gets its name. The landscape feels slightly wilder here but the road is still encouragingly wide and smooth. You steel yourself to hold the throttle wide, feeling pressure on your back as the Mercedes SLS AMG Black Series charges up the road, then suddenly the road is running out, for the glacier is where it stops. You lean on the big carbon-ceramic brakes hard enough to trigger the ABS and you jolt awake with the juddering and the wheels of the plane touching down. Just a dream.

Where is the: Grossglockner High Alpine road

The Grossglockner High Alpine road is a north-south alpine road in the Saltzberg region of Austria.

A day entry for an internal combustion car is €36.