Want the ultimate trackday car? Then you need to pay a visit to the small Bedfordshire outfit that’s making the impossible possible 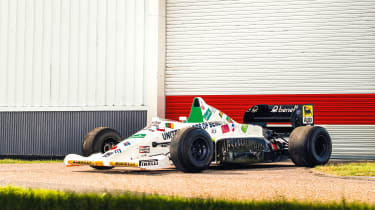 There’s a fairly small hangar close to evo’s offices, the type of which you’ll find on any number of England’s sprawling ex-RAF airfields, themselves now so often cauldrons of engineering endeavour in that uniquely British ad-hoc manner. Nothing unusual so far, but step behind its doors and you’ll truly enter a new world: one with a unique blend of advanced technical excellence and engineering pragmatism, where virtually anything in that extreme F1 bubble suddenly seems possible. Spend just five minutes inside here and, for me at least, the million-euro track-only hypercar takes a massive torpedo amidships. After all, why would you buy something like that when you could have one of the fastest four-wheeled circuit cars ever conceived for your exclusive, expensive, trackday fun?

Before I met Matt Faulks and his Tour de Force outfit, the private operation of retired Formula 1 cars dating from the past 35 years seemed a virtual impossibility. Sure, classic Ferraris and Maseratis from the ’50s, even Cosworth DFV-powered cars right up until the early ’80s are one thing. But who in their right mind would run the motorised firework that is a wild ’80s turbo car, or something with an air-valve V10 and a paddleshift ’box, let alone an F1 car from the current decade with its construction of pure unobtanium. Outside of the insular, mega-bucks world of Ferrari’s Corse Clienti, it feels like complete fantasy.

‘We hear so many times that these cars can’t be run,’ says Matt. ‘When we first started I spoke to a manufacturer of a part on the Minardi we were working on. “What is it you’re doing with it?” they asked. When I replied that we were going to run it they said, “Oh no, you can’t do that. It’s not possible. You’ll need the software!” To which I replied, “It’s OK. We found an Italian guy who had all that on floppy disks in his loft, and we’ve got the original code, and compiler, so I’ve written some new gearbox code and that definitely works, so, er, we just need the diff from you. Any chance?” 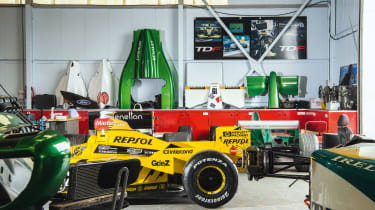 ‘There’s always a massive amount of negativity around these cars, but it’s simply a matter of budget and time. Even on a modern KERS F1 car – realistically over five years old due to testing restrictions – if someone desperately wanted to run that car we could do it.’

Having started his motorsport career in Formula Ford, and then worked in virtually every discipline including F1, Matt was taking a break from the sport’s pinnacle ten years ago when he was asked if he could make an old Minardi F1 car run again. He started that project in the basement of his house, and 14 wailing, roaring, fully working Minardis later, and many other F1 cars besides, he now employs a staff of seven, designs and manufactures 90 per cent of his components in-house, and offers anything from fundamentally re-engineering 30-year-old F1 cars to support for current F1 teams.

It’s an average day in the workshop when evo visits, with an ’80s turbo car, ’90s V10s, some early noughties-era chassis, plus some other projects present. They’re lined up in two rows, tubes attached and fluids in receptacles, panels off and entrails on show. If you love racing cars, the smell of their dismembered presence, the colours, textures, fascinating engineering and sheer motorsport history is heavenly. 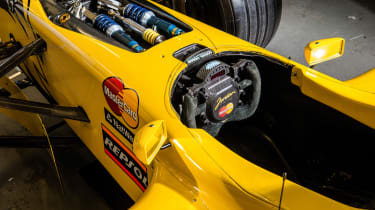 The most affordable option is the oldest – the big, bad, boosty world of 1980s F1. We walk over to a stunning, Benetton-liveried 1985 Toleman, Teo Fabi’s no. 19 chassis that he qualified 20th and last for the Monaco Grand Prix that year, retiring on lap 20 with turbo trouble. ‘You could buy a car like this for around £320,000, including a 3D scan of the body and suspension [so if you bin it TDF can make repro parts]. Some run with a copy set of panels, keeping their originals safe off the car, which is a lovely way of doing it. You can get turbo-era stuff for £180,000-200,000, but you wouldn’t get the spares and CAD back-up with it, or know the life of the components, so you’d have to strip it down and crack test everything first.’

Ah yes, on to the realities of running a car like this; after all, the Toleman only finished two races in 1985, so isn’t it going to be an expensive and frustrating pursuit to try to use it today? Safety of course, is paramount, so TDF call on the aerospace industry to analyse the structural integrity of absolutely every last part. Consumables, valves, washers and so on will always be replaced. Originality is kept wherever possible, but there’s no compromise on the running gear because these aren’t museum pieces, they’re cars to be driven, with modern FIA fuel tanks, and belts to work with HANS devices.

The Toleman may have its original grey Zytek electronics boxes, but inside them are carefully packaged modern ECUs, providing far more accurate control of the engine’s activities, and hence better reliability. In terms of raw power, the 1.5-litre in-line four produces anything from 500bhp at 9000rpm on 1.2bar of boost, up to 1000bhp at just under 12,000rpm on 4bar of boost. There’s no denying the Hart engine’s sustainability drops markedly if you actually run it at 4bar, but I also know I’d have to try it, even just once, if I owned this car.

So say you own the Toleman and want to run it at the Silverstone Classic. You’ll need £2000 for engineering support over the weekend, and from there it’s an additional £10-30 per kilometre, plus tyres. Call it £5000 for the weekend all-in. Matt explains: ‘The way we run cars is to work out a yearly mileage – typically 350km, which is actually a lot when you think about it – and once the car is completed we work back through our spend, putting a life on everything. That gives us a “per kilometre” figure. Occasionally we have to put caveats on there that if you exceed this mileage it’ll cost “x”, but this effectively allows people to work out their budget for the year. It’s the only sensible way to run it because it allows us to do everything properly: a car will need a crack test every 500km at £1000, but that’s cheap compared to a rebuild after an accident. 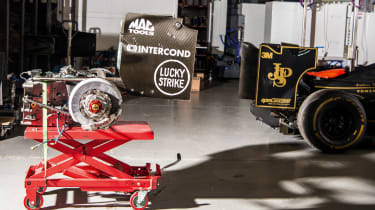 If you’re more into screaming revs than bookcase wings and 4bar boost, you’ll need to look at a rung up the cost and sophistication ladder: ’90s F1. Take the delectable Jordan Peugeot 195 in the corner of the workshop, coming back to life after years lying dormant. The Pug V10 is off at Judd Power being recommissioned and the chassis is being simultaneously restored but sympathetically modified so it can be driven in anger with at least a modicum of practicality.

‘We’ve had to engineer a lot on this car because so much was missing,’ says Matt. ‘We’ve made a new steering wheel that’s a very close replica of the original, a new wiring loom, converted it to have a collapsible steering column, a new fuel cell, modern electronics in the same voids where the originals were, our modern fly-by-wire clutch controller and so on. We’ve had new dampers built specially for it, with their own adjustment: if you’re running the car you don’t want to have to keep choosing from eight different sets like they’d have done back in the day.’ They’ve also converted it from hydraulic operation (for the gearshift etc) to pneumatic, because at 10bar instead of 230bar if the system lets go, it won’t now potentially cut someone in half, and it’s much cheaper and easier to run, with only the tiniest performance deficit. Wishbones are newly machined in steel (the carbon originals retained for display), while TDF designed and manufactured an entirely new gear set to fit inside the original gearbox casing.

Cars such as the Jordan need checking more often than those from the turbo era, with potentially shorter ‘lifeing’ on components, so while the support costs are the same, it’s more like £30-40/km to run, with a slightly higher purchase cost. If you want to go even more extreme, the ex-Jenson Button BAR alongside should suffice, and is one of the fastest F1 cars you could privately own (with a ‘modern’ KERS car you’d essentially have to lease the powertrain and its minders for your fun). The BAR, chassis 007, is another example of TDF’s ingenuity. There are no known Honda V10s left in existence, as Honda destroyed them all to prevent R&D escaping, so while this V10 may be badged Honda, it’s actually a Cosworth from the same season, capable of revving to beyond 17,500rpm. More than 2000 hours were spent restoring this car from the static Mercedes display car it had been previously to this working state.

The BAR will be costing over £40/km, which is where TDF’s latest project, for Formula 1 car dealer Heritage F1, comes in: the HF1-018 trackday car. Based on a competition-bloodied 2012 Sauber, it takes all of the firm’s knowledge on making F1 cars easier and more cost effective, reducing costs to £750 for support, plus £10-12/km. In fact, it’s so extraordinary we’ll be taking a much closer look at it in the near future. Although Matt advises some caution: ‘Once you’ve driven one of these it ruins fast road cars for you.’ Must make those hypercars, at twice the price, seem a little bit toothless…

We brought the Hyundai i30 Fastback back to its spiritual home in Germany's Eifel mountains, where there is a racing track you might well have heard o…
Visit/used-cars/19675/used-car-deals-of-the-week