The most popular Superlight is back, and it’s faster than ever 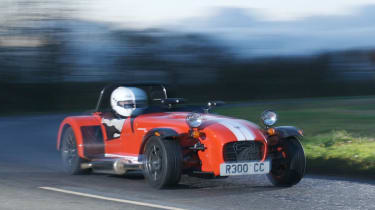 How much power is enough? In the last 12 months the 263bhp Superlight R500 has grabbed the most headlines for Caterham, seeing off newer, more sophisticated opposition to re-establish the tiny company’s claim to be the builder of the world’s best lightweight sports cars. Thing is, while the R500 is huge fun, it’s also Looney Tunes when you’re trying to keep its throttle close to the bulkhead. You have to process so much information and think so far ahead that much of the time the detail of what the chassis is doing, the joy of how the car feels in your hands, gets overridden.

Even the old R400 was bonkers, which is probably why the best-selling model in the Superlight range has always been the ‘entry level’ 300bhp-per-ton R300. In a Seven, this power-to-weight ratio is certainly ‘enough’; slithering up the road not far from the office, I couldn’t help thinking that the new R300 had a bit more than enough. Yes, roads untouched by the sun seemed to have been smeared with butter, requiring a tentative approach and sensitive right foot, but even on the dry, straight bits the R300 punched forward with striking aggression.

The last R300 was powered by a 160bhp Rover K-series that, to be more precise, gave a power-to-weight ratio of 325bhp per ton, yet while the new model’s Caterham-tuned 2-litre Ford Duratec is slightly heavier (by about 7kg) it more than compensates by pumping out 175bhp. That gives a fraction short of 350bhp per ton, and even with a 70kg driver installed you’re still looking at over 300bhp per ton – comfortably more than a current M3, 911 or Evo FQ-360 enjoys.

Otherwise the formula is pretty much as before, standard kit including a six-speed close-ratio gearbox, wide-track Superlight suspension, four-pot disc brakes up front, thin composite bucket seats with four-point harnesses, and carbonfibre for the front wings, nosecone and dashboard. The ’09 model also gains the R500’s flat metal switchgear and new SPA analogue gauges. Not included for the £24,995 (add £3500 if you want Caterham to wield the spanners and register it) are a windscreen or weather equipment, while options on this car that I’d consider essentials include the limited-slip differential (£895), 13in alloy wheels (£210), paint (£850) and stripes (£185).

The old Rover-powered R300 was frisky enough, but there’s more brute to this Ford-powered version; the Duratec hits harder and sooner and revs out with such vigour that, until you’re on top of it, the soft limiter is kept busy. And while it sounds no louder than the K-series in terms of decibels, it’s somehow a more penetrating engine, its note harder-edged and more insistent. I wasn’t anticipating an R500-style bombardment of the senses, but the new R300 really does feel like a chip off the old block, more so than I recall the new 210bhp Duratec R400 feeling.

Fat Avon CR500s, a slippy diff and slick asphalt are an entertaining combination, especially in tight corners, but there’s fine damping and great natural balance here that give the R300 superb poise. Even at speed on a flowing road you know where the limit is, each corner of the car feeding a stream of information to your hands and seat. Driven close to the limit of grip, playing the throttle gently, tapping into as much of the engine’s urge as you dare, the R300 feels smooth and unhurried, yet the moment you catch up with another car you realise how swiftly you’re travelling. And when there’s a dry road beneath its tyres, the R300 hooks up and charges off with such conviction that you have to keep reminding yourself that it’s the junior of the Superlight range.

Perhaps a better way of describing the R300 would be ‘Son of R500’. It has the same character, the same feel, the same spirit – and plenty enough power to satisfy most drivers.