Just when Roger Green thought his tactics for the latest round of the Westfield Championship couldn’t fail, events conspired to show him otherwise 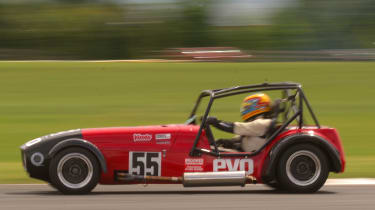 Most of the thrill of racing lies in anticipation. From the moment you post your entry form there’s a steady build-up of tension. As the race weekend draws nearer, thoughts of tactics, set-ups and potential ways to shave a tenth or two off your lap times increasingly occupy more of your idle moments. Eventually you find you can’t concentrate on anything else. Office meetings from the Thursday onwards are pointless. How can you concentrate on the agenda when most of your brain capacity is busy working out the best way to maximise the tyres in qualifying?

You’ll have checked the weather forecast on the internet at least daily and if it looks a bit iffy you’ll have thought through a plan for both wet and dry conditions, as with only fifteen minutes of qualifying it’s likely to be one or the other. Well, that’s my logic anyway, and as I climb aboard our home-built Westfield AeroRace for the third event of the season, this time at Croft, all seems set fair. All morning the sky has been a pleasant mix of fluffy white cumulus and patches of blue – perfect for me as I’ve not been to this tricky little circuit just outside Darlington for quite some time, so I’m going to need to reacclimatise myself during the first few laps.

Of course, in all the planning I’d never once considered that a short, sharp shower might arrive seemingly from nowhere just five minutes before we’re released onto the circuit. After raining just enough to make the surface greasy, it stops as we’re waved out. No probs. I’ll stick with Plan A – the track will be at its best at the end of the session, which is when I’ll pop in my time. Play it cool, get a feel for the track in the first few laps, no pressure.

Ten minutes in, I’m happy. The day I’d spent at Bruntingthorpe working on set-up with the Westfield crew was a forward step – our car is more positive now – and I’ve sussed where the grip is best and which kerbs I can use. Time, then, to start braking later, carrying more speed into the apex and squeezing on the power more firmly at the exit. This is the moment that all the anticipation has been building up to.

And then it starts raining again. Hard. So hard in fact that there is no point in continuing on to the end of the session. The sweet-spot has well and truly passed and I’ve missed it, leaving me sixth on the grid for Race One tomorrow.

When things go right, racing is brilliant, a heady mix of adrenalin and achievement, but when they don’t, even in the smallest way, it’s massively frustrating. ‘Sixth is OK,’ others say, but you know in yourself it’s a missed opportunity that has you on the back foot. There are two classes in the Westfield Championship and if we are to have any chance of sticking with the front-running Class B cars, our Class A machine has to be in their slipstream from the start. I can’t help but feel a little flat for the rest of the day; I need some luck tomorrow.

Sadly, I don’t get it, but that’s not to say I don’t have fun. Battles always rage throughout the Westy field, and with a hole being punched in the air by the car in front you’ll regularly find yourself overtaking and then being overtaken. The 20-minute races pass in such a blur of action you have to revert to the on-board video footage for detail.

You always remember the results, though – in this case fifth place in both races. You can bet we’ll be aiming higher when we head to Castle Combe for the next round.