John Barker enters a 4hr race at the Nürburgring. It’s his first ever race there – and it ends rather abruptly 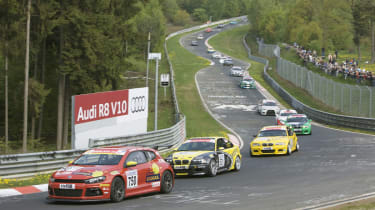 Third gear, fourth and into fifth. We’re gathering big speed, plunging downhill towards the Fuchsrohre or Foxhole and its spine-squeezing compression. I just wish I could see where I was going. Filling most of the Scirocco’s screen is a huge, impenetrable ball of spray, the wake of three slower cars I’ve caught at precisely the wrong point. I just hope no-one ahead is spinning…

I back off a bit for a better view. It’s the right thing to do but another part of me wants to keep pressing on; this is a race after all, my first ever on the Nürburgring Nordschleife. The Volkswagen Motorsport team, however, could do with an untroubled run to the finish. I’m driver two of three: Peter Terting, a 25-year-old pro racer from Kempten, Germany, got us off to a brilliant start and I’ll be handing over to Vanina Ickx, ex-DTM racer and daughter of the legendary Jacky.

Next lap round, there are waved yellow flags and up the hill from the Foxhole is the steaming wreck of a 911, backed into the Armco, grass, dirt, bumpers and unidentifiable plastic parts flung across the track. Further round the lap, at Kesselchen, another fifth-gear, 100mph-plus kink, there’s a BMW, probably an M3, hundreds of yards away from where the accident started. The lap after the brave marshals have swept it all away, another BMW has almost exactly the same accident. Make a mistake on the Nordschleife and there’s a good chance you’ll get punished heavily for it…

I knew this when I accepted the offer to drive a Scirocco GT-24 at the Nurburgring 24 Hours . It’s partly what makes racing here such an incredible, unique challenge. Last year one of the Volkswagen Motorsport drivers, Dieter Depping, was lapping his Scirocco fastest of all the 200-plus cars, including the big Porsches, at night, in the wet. When I met him a few weeks ago, I asked him what was the worst thing about the 24 Hours and he said ‘driving at night, in the wet’. He’ll be back again this year for the race on May 23-24, part of a five-car VW entry made up of three petrol-powered Sciroccos and two powered by CNG (Compressed Natural Gas). One of each has been entered for our warm-up race, a round of the VLN series.

Apart from being painted orange rather than blue, the gas-powered car differs from the petrol version in a number of ways. Its four-cylinder 2-litre turbo engine has manifold rather than TSI direct injection and has been tuned to produce just under 300bhp, about 15bhp less. And while natural gas is rated at 130 octane, its energy density is significantly less than that of petrol so there are two barrel-shaped fuel tanks, one behind and one alongside the driver, carrying a total of 250 litres to give a similar range to the petrol version.

Andreas Lautner, VW Motorsport’s technical director, reckons that although the CNG cars will not quite match the ultimate pace of the petrol cars (predicted at 9:05 or less with this year’s slightly shorter Grand Prix loop), they will grab back big chunks of time refuelling – 250 litres of gas goes in in just over a minute. There is another variable, too: the CNG cars will use Dunlop tyres while the petrol cars continue with Michelins.

The team has been here since Tuesday and has put in a couple of days useful testing in glorious sunshine. It hasn’t gone perfectly, though: yesterday they lost two cars, one of them in a shunt big enough to damage the rollcage. And now it’s raining.

When I arrive for my test session, I’m told that some Spanish chap called Carlos Sainz will drive for about an hour, then it will be my turn. In the pit lane I meet Kris Nissen, director of Volkswagen Motorsport. ‘We had a bad day yesterday, so please keep the car in one piece,’ he says. ‘I don’t care if you’re 10 seconds under the pace or 10 seconds over it, we can’t afford to lose any more cars.’

It’s a long hour. Finally I get the nod that this is Sainz’s last lap and go through the ritual of helmeting up: lick ear plug monitors and stuff in ears, pull on balaclava, then helmet. Finally squeeze arms of glasses inside balaclava and over ears, do up helmet strap and suit collar and plug earphone jackplug into helmet socket. Ready. Except my glasses are steaming up.

Sainz arrives, I take his place and as I’m being strapped in he leans in and says ‘standing water’. Hmm. Push a small button on the top of the wheel to engage the gearbox, pull back to select first – someone leans in and puts the wipers on, the door slams – squeeze the throttle and we’re away down the busy pit lane.

It’s a tentative first couple of corners, particularly as my glasses are still fogged. The brakes feel heavy and not hugely responsive but the DSG gearbox is smooth and effortless. With over 300bhp the Scirocco feels nicely potent: it’s quite easy to get too much torque mid-corner and – Woah! – the whole front end leaps a few feet sideways.

For the first couple of laps, it’s me and the grip and the circuit. At times the traction is exceptional and I realise that it’s when the Scirocco is in a straight line. Feeding the throttle in gently is the way to go. But in five laps only one yellow-lamped 911 comes past – the fastest cars wear yellow headlamp covers. It’s deceptively quick, the Scirocco, and in the rain we pass M3s of various evolutions and a couple of 911 Cup cars. And on each lap I find a patch of water on the big straight just before the kink that gets the Scirocco momentarily aquaplaning in sixth gear at about 140mph.  Afterwards, Sainz and I compare notes, which is a bit weird for me. I see Nissen too and I’m relieved when he says, ‘I didn’t see all your laps but your second was 11.40, which is good.’ I’d like to say I sleep easy but that would be a lie.

Race day dawns very foggy. Qualifying is due to start at mid-morning, the race at 12 noon and it looks like there might be a delay but the fog disperses quite quickly. It’s still raining, though. Vanina Ickx takes our orange CNG Scirocco out first, puts in two laps and then it’s my turn. The rain is getting lighter, the track faster, and when I hand over to Terting a dry line is appearing. He makes the most of it, banging in a superb sub-10-minute lap that puts car 750 on row eight in the first of the three grids – the 180-odd starters are split into three groups and have their own rolling starts. Alternative fuel cars have been lumped in with the big boys and Terting will start surrounded by Porsches and V10-engined Audi R8s.

Rather him than me. It stays dry right up to the start, which means the Scirocco will be easy meat for the more powerful cars. As the first grid roars over the start line, the orange Scirocco is already being overhauled, but by the end of the first lap there are spots of rain. Speaking later, Terting says the first lap was, er, interesting: ‘The bigger cars, they want to eat you! And nobody wants to wait to overtake a Scirocco – I was pushed around the first lap! But already by the end it was raining, and on wets the car was really quick too – I overtook a few Porsches back.’

It’s properly raining by the time I get into the car, wetter than in qualifying and it takes a sensitive right foot to keep the Scirocco from pushing wide. The massive accidents are rather sobering but they’re dealt with efficiently and racing seems barely interrupted. I’ve no idea where we are in the standings and, to be honest, it wouldn’t make any difference to how I’m driving – before I saw the big crashes I’d decided to be conservative at the risky corners and try and improve my lines to maximise drive everywhere else.

About six laps in, I’m heading down to the bridge at Breidsheid and there’s a red and yellow flag indicating a slippery surface. I brake earlier but there’s only so much speed I can scrub off. I turn in and the car goes sideways. It’s a heart-stopper. The red and white kerb and wall are rushing to meet us. I wind on some opposite lock and a moment later we’re off the slippery patch and heading forwards rather than sideways. Phew.

A couple of corners later, however, my race is over. Climbing out of Bergwerk the revs die. I go down through the gears but the engine has no more than tickover to offer. Then it dies and I coast to a halt on the grass. Over the next few minutes I try everything I can to get it going. It does start but as soon as I take first it dies again. I try radioing my engineer, Fabrice , but I’m in a radio blackspot. I curse that I haven’t got my mobile with me (all the Sciroccos will have one for the 24-hours). I sit out the rest of the race with the generous marshals at post 127, sipping camomile and peppermint tea.

Turns out the engine had been changed the day before and one of the electrical connectors had been damaged and then worked loose. It was a difficult few days for the team, but better to have these issues now than in the 24 Hours.