We met Ron Dennis to ask about his new role, the new car and the company’s ambitious plans 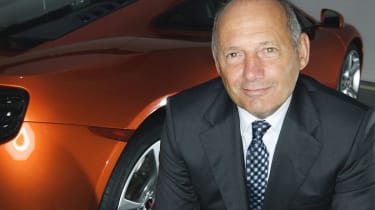 We’ve all seen Ron Dennis being interviewed on TV, so some things don’t come as a surprise when you meet him in real life. His office is well appointed but erring towards the minimalist end of uncluttered. His suit is immaculate. His shoes are shiny enough to see your face in. But in person Dennis also has an engaging charisma that never came across when you saw him getting collared by Ted Kravitz after a Grand Prix. He smiles. He laughs. At one point he tells an excellent anecdote about accidentally knocking out Gerhard Berger.

But beneath the geniality there’s the quiet intensity that has made McLaren a huge success under his stewardship. And not just when it comes to racing cars going round in circles. Within the McLaren Group there’s McLaren Electronics, for example, which supplies the standardised ECUs not only to the entire F1 pack but also to IndyCar and for a new generation of piston-engined aircraft. McLaren Applied Technologies sells its telemetry know-how beyond motorsport to, amongst others, the medical sector. And of course there’s still McLaren Racing, the familiar F1 team currently staging a late rally in the 2009 World Championship. Not a bad set of businesses to have in your portfolio, all operating out of an impossibly futuristic headquarters near Woking where some of the doors slide open when you brush your hand against the adjacent wall and the on-site ATM is inexplicably marked as a ‘cash zone’.

Yet against this remarkably clean, ordered and apparently successful backdrop, Ron Dennis is about to make his company’s life more complicated with a return to road car manufacture. By 2011 the MP4-12C will be emerging at a rate of 1000 cars a year from a brand new factory to be built alongside the existing McLaren HQ. And even this potentially ambitious scheme is only the start of McLaren’s new car-building aspirations. A new car, a new factory, a new future for a company that on the surface seems to be doing pretty well as it is. evo has been granted time with Dennis to ask one overriding question – why?

‘When I stood in the pitlane three years ago I realised there was only one other team there that had been there in 1966, and that was Ferrari,’ Dennis says. ‘And I started to think about all the teams that had come and gone and I suddenly realised that if you really want to protect the workforce, protect the brand, you have to broaden the brand. The measures we’ve embraced as a Formula 1 team to reduce costs put us under a lot of pressure. How do we maintain the level of workforce that we’ve got? Hopefully our automotive group as it grows will provide part of the solution to those problems.’

And if McLaren Automotive’s growth – currently laid out in a 12-year product plan – goes to schedule, the 12C is just the start as the road car range expands, not only with variants of this car but also with a separate up-range supercar to duke it out with the next Zonda and another model that will take the fight downwards towards the 911 and Audi R8. But the decision to start in the middle was, Dennis says, dictated by the ‘mathematics’ of entering the sports car market. ‘From one end you’ve got a need for a lot of capacity pushing the volume, and it’s profitable if you’ve got the volume but you’re starting from scratch. The other end you’ve got flagship cars, but the companies that make those cars can’t stand comfortably on their own feet. No one in the world believes that Bugatti is a profitable stand-alone business, it can’t be. Therefore it’s the business of producing high-performance cars that pulled us into the middle sector.’

So a sports car range that starts with the Ferrari 458 fighter and then branches upwards and downwards is a given, but though Dennis promises some ‘diverse’ thinking in his future cars, don’t expect an Aston Rapide or Porsche Panamera rival. ‘We do not visualise anything much more than 5000 units a year. We most certainly don’t visualise going beyond 10,000, and we’re talking years and years ahead, and when you look at those sort of volumes, I don’t think we have to look at ways to achieve them which companies such as Aston and Porsche have to do. We are focused on a specific part of the market.’

The cars, then, might be broadly easy to predict. The way they’re made, less so. The 12C’s carbonfibre MonoCell is, according to Dennis, ‘key to the whole programme’ and the main benefit of starting with a clean sheet of paper. More than that, he says the makers of rival cars won’t be able to copy its advanced carbon core overnight because to do so would mean the ‘decommissioning of existing manufacturing technologies, and that gives us a unique selling proposition’. He also points out that, since the car’s primary structure isn’t its outer skin, new variants can be introduced without the outlay of re-tooling a steel or aluminium shell.

Dennis has firm views on how McLaren’s road cars should drive, talking with fervour about his ‘aversion to a sports car not having a good secondary ride’ and how such a thing is rare but vital if you’re negotiating a pothole and have ‘any mechanical sympathy’, but he is also admirably keen to stress that he’s just ‘a component in the process’ of seeing them to fruition. Though he’s tried the 12C mules, he’s not demanding a prototype to take home every night (‘I don’t consider myself to be a development driver,’ he says. ‘So why the hell would I drive the car?’). He knows he can trust the team around him to share his focus, drive and determination. ‘You cut people here and they bleed McLaren,’ he says.

Instead Dennis has busied himself with the broader business of financing the entire road-car project and securing the planning permission for the new factory, something that’s now been granted. These twin, and undoubtedly rather time-consuming parts of the McLaren Automotive grand plan required a lot of his attention. And this, he stresses, is precisely why he famously stepped down from his role as team principal at the F1 team. ‘A lot of the media accused me of having a gun to my head but it wasn’t very long after the last Grand Prix that I absolutely decided not to be the team principal, and Martin [Whitmarsh, now McLaren Racing team principal] really didn’t think that I meant it. I probably finally convinced him in January when I said that morning I was going to announce it. But I most certainly chose to focus on this. How can I go to an investment bank and say, “I am totally committed to this,” if they could say, “Yeah but, Mr Dennis, what are you doing on the pit wall?” Then people say, “Oh, he’s not going to any races.” The only reason I’m not going to races is because I am totally, 100 per cent focused on this programme. Full stop.’

Ron Dennis’s idea of focused is probably beyond even the most dedicated car company boss’s idea of keeping their eye on the ball. During evo’s time with him he strides over to his desk and grabs a document a good three times as thick as this magazine. It’s the ‘gateway’ document that details every aspect of every bit of the car during its development. They publish one of these every week. And Dennis goes through it every week. This, he says, is ‘the McLaren way’. With obvious pride he picks on random pages to show the thoroughness with which tiny details are being questioned and finessed.

‘I look all of this up. What I don’t do is meticulously go through every single page. But I know the issues,’ he says, adding a wry, ‘this is the sort of stuff I get off on.’

Dennis takes us down to the former Merc SLR handover suite to show us the 12C and pose obligingly for evo’s photographer. Pictures done, he makes for the touch-sensitive sci-fi door, pausing to cast an eye over the camera gear piled on the expensive leather chairs at the back of the room. ‘Look after my furniture,’ he says benignly, and then he’s gone. How many corporate bosses have such an obsession with detail that they’re worrying about their chairs? Much though Dennis is scrupulously keen to pay tribute to the team around him, you know that this is Ron’s car. And Ron’s car company.