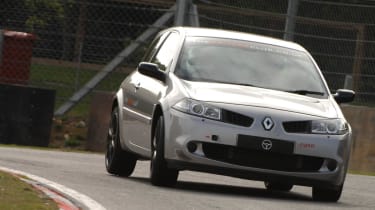 There are plenty of driver training companies out there willing to teach you the basics of performance driving on road and track. But what if your aspirations lie beyond that? The Drivers Club – a new venture run by Jota Sport – is for those who want to train themselves up for maximum attack track driving or, perhaps more uniquely, motorsport.

It’s for the latter reason I’ve found myself at the Brands Hatch GP circuit on a rather busy RMA trackday, strapped into a Renaultsport Mégane R26.R with Formula 2 driver Ollie Hancock at the helm.

He’s my teacher for the next few hours, as I sample The Drivers Club’s training first hand in a day that squashes several weeks’ worth of training into a day. Ollie drives a few sighting laps before I take over and show him how much talent I currently possess.

The answer’s a resounding ‘not much’. My circuit CV currently extends to a handful of laps of Bedford’s West Circuit, for photography reasons only and not at speed. Brands Hatch in an R26.R on an advanced level trackday brimming with Porsche 911s is quite some baptism of fire. I struggle on my first stint out, trying to balance Ollie’s instructions with remembering my lines on each corner, while simultaneously not taking the side off someone’s Stuttgart-badged pride of joy.

It’s a relief to come in and de-helmet, at which point me and Ollie have a good natter and work out how to improve on my next stint. I’m immediately more at ease as we head out again, working out where the Mégane’s turbo can be exploited and where not, so that I know where I’ll be keeping pace with the others or holding them up.

By my third and final session in the R26.R, just before lunch, I’m able to relax and take in Ollie’s co-driving, finding myself frustrated when I miss a line or scrub off more speed than I need to before a turn. It’s addictive stuff.

Relaxation is over once lunch has gone, though, as the Renault has been tucked away for the day, in its place a Radical SR3. Now things get tricky.

As someone fairly new to track driving, never mind packed trackdays, stepping into a Radical is daunting. Needless to say, it’s immediately unlike any other roadgoing sports car, and after Ollie whizzes round Brands at an impressive speed to show me the ropes, I clamber into the driver’s seat and head out.

One slow and steady lap getting to grips with the car later, I pass the start/finish straight and go for it. A few seconds later I’ve spun at Druids, and equally embarrassingly, stalled the car. It’s a simple case of user error with the sequential gearbox, but a massive confidence knock all the same.

I crawl the Radical back to the pits so that the knobbled starter motor can be replaced, head hung low. A second (and final stint) an hour later and I’m back to taking things steady, perhaps too steady; I’m in probably the fastest car at Brands all day but holding up far lesser stuff at most corners, incredibly conscious of the havoc another impromptu spin would wreak. Ollie’s not overly impressed by my pussyfooting, but it’s clear that I need many stints in the Mégane before stepping up to something as specialist as the SR3.

That’s not really a negative point on The Drivers Club and its training, though. The big selling point is that their tuition is completely bespoke, and suited directly to your needs and aims. Those may be as simple as learning how to get the best out of your M3 on a trackday, but could extend to working your way up to a seat in Le Mans.

My taster day showed I have much to learn on the track, predominantly revolving around confidence in myself and growing the balls to push a car to near its limits. In the Radical I was nowhere near them. But with my own training plan (and lots of time and cash, too) who knows what’d be possible…

Find out more about The Drivers Club right here