Making of a Ferrari

From billets of aluminium to a glorious, pulsing V12-engined California, we follow the Ferrari production process – then take the finished car out onto the roads around Maranello 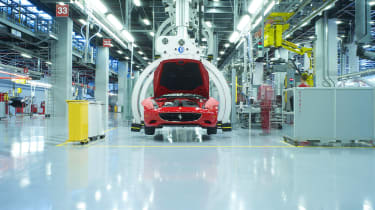 The sharp light of a sunny Maranello morning floods into Ferrari’s metal foundry and flares off a bail of roughly-cast aluminium alloy billets positioned just inside the entrance. The five-deep, cross-layered stack is trussed top-to-bottom with sturdy nylon strapping and might be mistaken for a stash of large gold bars but for the absence of the tan-giving glow. Comparing job descriptions, though, billet beats bullion hollow. Propping up the wall of a subterranean bank vault hardly competes with becoming the fabric of a Ferrari California's 4.3-litre V8 engine.

It was a foundry owned by his father that taught Enzo Ferrari the fundamentals of metalwork as a boy. The dull, silver-grey piles of Earth’s most abundant metal stacked so neatly between yellow grid-lines painted on the floor of the planet’s most iconic car factory are a potent reminder that this is still where it all begins. No matter how efficient, self-contained, worker-orientated, green and achingly tasteful Ferrari’s manufacturing complex has become – company President Luca di Montezemolo set the coordinates for the 200million-euro modernisation in 1997 – the foundry remains ground zero for every Ferrari F1 and road car.

You can peer down on it from the stunning, recently completed workers’ canteen which, at a distance, resembles the aerofoil of an F1 car, and get a sense of how Ferrari is slowly reinventing itself, refining the brand’s image and values. The desire to combine time-honoured crafts and traditions with new technologies and techniques seems to be powering Montezemolo’s vision. That and the kind of intimate control that’s only possible when the process of making an engine begins with melting aluminium and pouring it into casts and ends when the finished powerplant streams into the company’s new state-of-the-art, two-floor assembly facility (V8-engined cars downstairs, V12s upstairs). This is the process that last summer produced the very first California. And now that production is in full flow we’re here to watch another car leave the line – and then take it for an exclusive drive on the roads around Maranello.

The factory is the work of French superstar architect Jean Nouvel. It’s a remarkable workspace with vast skylights and reflective plates that bathe the whole area with natural light. There are green areas with trees, shrubs and gardens, too. Some parts of the factory look like a modernist hotel, others like the Eden Project. It would be hard to imagine a working environment more loosely related to the conventional car factory or, indeed, that which produced 308s and Boxers back in the ’70s.

The foundry isn’t what you’d expect, either. The terrible roar of the furnace, the wilting heat and the sight of red-faced men glistening with perspiration as they wrestle with impossibly dangerous machinery are notable only by their absence. In fact, the ambient noise levels are closer to those of a Venetian glass-blowing factory than heavy industry. What goes on here, however, is somewhat more complex than puffing down a pipe. And it starts with the raw material the California’s engine block and cylinder heads are made from.

The billets that arrive on palettes aren’t pure aluminium but a special alloy that includes 7 per cent silicon and a trace of iron to improve mechanical integrity. First it’s tested for its chemical composition, then a sample poured off and made into a rod and mounted in a machine that stretches it to determine its tensile strength. The data is stored for years in case of any future defect; all engines and components cast from the same lot can then be traced.

The foundry manufactures its own casting moulds. They’re made from sand, bound together with resins. The liquid metal enters at 720degrees C and a controlled cooling process prevents bubbles forming inside the casting. To help the molten alloy flow into some of the more intricate, thin-section moulds, a technician flames the mould with an acetylene torch. The carbon that’s deposited turns the part black but acts as a lubricant to smooth the flow. Machines that pour precise amounts of molten alloy into moulds simplify life for the operator. What once required a two-year apprenticeship has been replaced by a week’s training on the pouring machine.

Parts are finished by hand and a plethora of final checks carried out (including X-ray inspections on 10 per cent of the parts). The California’s cylinder heads are treated to an examination with something that looks like a medical endoscope that can see round corners and identify the smallest cracks and flaws while the engine block is pressure-tested by sealing it up, submerging it in water and looking for bubbles.

In the Nuova Mechanica, or new engine assembly building, more indoor trees and gardens help create a relaxed, low-fatigue, sanity-sustaining ambience (think of the needs of lonely inter-stellar colonists) and maintain the ideal humidity. The building is divided into two sections. Machining of the California’s block and heads is undertaken in the front part, while the billet cranks, camshafts and other steel parts are machined in the back. Perhaps the most fascinating operation is one of the few carried out by robots, which dip the valve-guides in liquid nitrogen to minus 385degrees F to shrink them, then insert them into the room-temperature cylinder head. Engineering doesn’t get any closer to zero tolerance.

A word about the workers. When Ferrari found it hard to recruit young people to work at its engine, paint and foundry plants because of high real-estate prices, it set up Maranello Village to provide company-owned apartments, a gym and medical facilities. The Ferrari plant was judged by the Financial Times as the best place to work in Europe in 2007, noting the ‘incredible pride’ expressed by employees in the firm’s heritage and global prestige.

But then Ferrari is the beating heart of Maranello and an aspirational totem for Italy itself. And if their shirts, overalls and shoes force you to conclude that they must be red-blooded too, it’s only because, quite rightly, they regard themselves as every bit as much a component of the Ferrari brand as a conrod is a component of a Ferrari engine: vital to its wellbeing. The dress code is as simple as they come: Ferrari. All right, Ferrari and a bit of Shell.

And the reward for their passion, loyalty and dedication? Formula Uomo (literally formula man), Montezemolo’s initiative to ‘create a working environment unlike any other anywhere in the world’. The philosophy is simple: a happy worker is a better worker. So the newly renovated Ferrari complex has been designed to architecturally reinforce the synergistic relationship between work and results. The new buildings even conserve energy by using solar cells and trigeneration systems, which produce electricity, heat and cooling simultaneously from a single energy source.

But nowhere is Formula Uomo more apparent than the new California production line. It takes three weeks to build a California from start to finish. Uniquely, they build up the engine, transmission, suspension and brakes into one unit before fitting it to the bodyshell.

Almost all of every California’s journey through the assembly hall, after the engine and drivetrain have been mated with the aluminium spaceframe and body, is conducted in the jaws of a huge, gantry-slung cradle that can be raised, lowered, swiveled and tilted to any angle by each individual operator. It means he or she can work on the car at the ideal, personalised height, neither crouching nor stretching.

The speed of the line is pretty leisurely, too. Although the aim is for the California to boost Ferrari production by 50 per cent, there’s no need to rush. There's only one shift a day, from 8am till 5pm, and total production is 10-12 cars a day. Hitting the highest standards for quality is the overarching goal. In fact, the place has an air of calm focus that wouldn’t seem out of place at a transcendental meditation convention, though no convention centre ever looked as good as the inside of Nouvel’s factory. But then Ferrari has never seen itself as just another car maker or even a purveyor of high-end luxury goods. As Montezemolo often remarks ‘Ferrari is not a car, it is a dream’.

And as our red California finally descends to ground level, the sentiment seems especially apt. In those early photos, it looked all wrong. In the flesh it looks entirely, stunningly right. Keys?