Ferrari prices its 458 Italia supercar. Less than 430 Scuderia, but with mad options 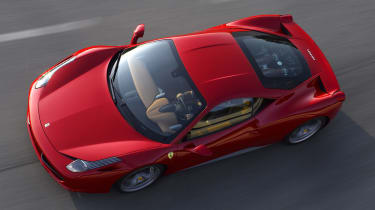 Ferrari has finally priced its new 458 Italia. The striking new supercar will set you back £169,545. While it initially appears a sharp rise in price for what is technically the Prancing Horse’s entry-level car, it’s over six grand less than the 430 Scuderia that it effectively replaces and whose power and performance it trounces. The price includes the new £950 tax rate that is slapped on the most polluting band of cars when they are sold. The rest of the company’s range has had its prices adjusted (i.e. they’ve gone up), too. Ferrari ownership kicks off with the California drop-top at £143,325, the 599 Fiorano supercar will set you back £207,075 and the 2+2 612 Scaglietti a modest £217,230. More intriguing, though, is some of the options that reside on the 458’s ticky box list. If you get carried away the car will far surpass the £170K base price: steering wheel LEDs are £2794, an alcantara boot carpet is £1445, electric seats are £2120 and a spare wheel is £1156. Specifying the latter on a new Fiesta Zetec S is a slightly more acceptable £30.65, 97 per cent cheaper. Still, it does nothing to put us off the rather excellent 458. Revel in its abilities by perusing our features and videos by clicking the links below.