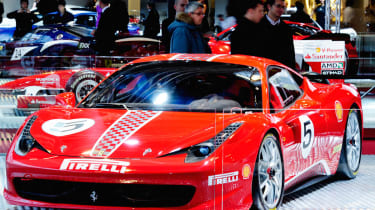 The Ferrari 458 Challenge racing supercar has been revealed at the 2010 Bologna motor show. It’s the latest mid-engined V8 to be optimised for Ferrari’s one-make racing series, following on from successful racers based on the 355, F430 and more. It slots in Ferrari’s circuit range beneath the exclusive FXX and 599XX trackcars. The 458 Challenge possesses the same 4.5-litre V8 engine as its road-going equivalent, the Ferrari 458 Italia, boasting 562bhp and 398lb ft, and a theoretical 200mph+ top speed. While the engine spec is the same, the gear ratios and dual-clutch F1 transmission have been tweaked to yield torque lower down in the rev range, while the road car’s E-Diff electronic differential makes a debut appearance on one of the Prancing Horse’s track-only cars. It comes completely integrated with F1-Trac traction control, which boasts two different track-biased calibrations, selected via the steering wheel’s manettino button. The Ferrari 458 Challenge gets a specific suspension set-up, with steel uniball joints, stiffer springs, single-rate alloy dampers and a 50mm lower ride height, while new 19in forged alloys come wrapped in slick rubber, and shroud new ABS-enabled Brembo CCM2 brakes. Body panels are thinner than the road car’s, while carbonfibre and Lexan are used to cut weight elsewhere. All of the developments have led to a lap time quicker than the racing F430’s – the 458 Challenge laps Ferrari’s Fiorano test track in 1min16.5sec, over two seconds quicker than its predecessor.