The drop-top Ferrari 458 Italia, the 458 Spider, makes its world debut at the Frankfurt motor show 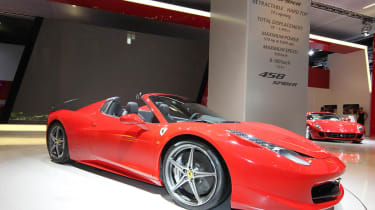 Ferrari has given the 458 Spider its official unveiling at the Frankfurt motor show.

And it’s pretty much as we reported before. The roadster version of Ferrari’s V8 supercar gets a clever two-piece folding aluminium hard-top, but is otherwise mechanically identical to its hard-top sister. That means a mid-mounted 4.5-litre V8, 562bhp, a top speed ‘greater than’ 198mph and what’s described as a ‘sub-3.4 sec’ 0-62mph time.

It’s a handsome looking machine in the metal, with the roof motoring up or down in just 12 seconds. To judge from the crowds surrounding the Ferrari stand during most of press day, it was also one of the most popular cars at the show, despite being otherwise identical to the Ferrari 458 Italia.

Prices will start from £198,000 before the inevitable options workout.