The Ferrari 458 Speciale previewed on video. Slides, drifts, a standing start and its active aero in action 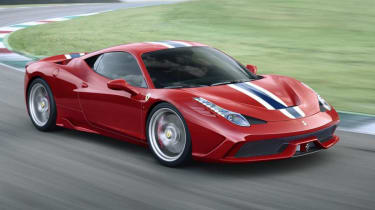 4
A video of the Ferrari 458 Speciale has surfaced. The new V8 supercar is Ferrari’s most extreme yet, a faster and more powerful version of the 458 Italia and – potentially – the last hurrah for the naturally aspirated V8 Ferrari.

To preview its more pumped-up McLaren 12C rival, Ferrari has released a video of the 458 Speciale in action on road and track. And while some official manufacturer promos are quite synthetic – slickly shot footage of a car being sedately driven in a straight line – this one is a little different. It reflects the Speciale’s more extreme nature with plenty of powerslides and drifts (showing off SSC, Side Slip Angle Control, new oversteer management electronics) and a launch control start. There’s even a gratuitous blare of exhaust noise through a tunnel.

Perhaps most interesting, though, is the demonstration of its active aerodynamics, with flaps contained within the new front splitter design and a moveable device under the rear diffuser. It’s pretty beguiling to watch and if you didn’t already want a Ferrari 458 Speciale, you surely do now. A price tag well north of £200,000 could prove prohibitive, though…