Iconic Ferraris off to auction 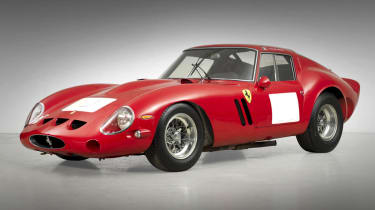 Ten Ferraris from the Maranello Rosso collection in San Marino will go under the hammer at this week’s Bonhams sale at Quail Lodge in Carmel, California.

Among the cars being auctioned are a 1962-63 Ferrari 250 GTO expected to reach a record sum, and a 1978 Ferrari 312 Formula 1 car raced to victory by both Carlos Reutemann and Gilles Villeneuve.

The GTO, chassis number 3851GT, has a long competition history in Italian mountain-climb races and a second-place overall finish in the 1962 Tour de France Automobile, piloted by Jo Schlesser, the French driver later to compete in Formula One with Matra and Honda between 1966 and 1968.

Partnered with friend Henri Oreiller, Schlesser took the GTO home in second place against strong competition from eleven other front-running 250 GTs. Sadly, Oreiller was killed at a subsequent race at Montlhéry Autodrome, but Schlesser repaired the car and by 1965, the car found its way into the hands of Italian enthusiast Fabrizio Violati, whose family it has in remained for the last 49 years.

The GTO could smash the previous record value for a GTO at auction, that of a 1963 250 GTO that sold for $52million (£37.6million) last October. This example could reach an estimated $75million (£45million) in the Quail Lodge sale.

For less than a fortieth of that sum, buyers could get their hands on a 1978 Ferrari 312 T3 Formula One car. Chassis number 033 was driven to victory by Carlos Reutemann at the 1978 British Grand Prix at Brands Hatch. The win came after a difficult start to the season in which Reutemann suffered several mechanical failures and accidents. The car was later driven to victory at the 1979 Race of Champions – also at Brands – at the hands of French-Canadian ace Gilles Villeneuve.

Fresh from 34 years as part of the Collezione Maranello Rosso, the 530bhp, flat-12 single-seater is for sale without reserve, and is expected to bring in bids of £890,000 to £1.2million.

The Collezione Maranello Rosso auction takes place on Thursday August 14, at the Quail Lodge and Golf Club in Carmel, California.