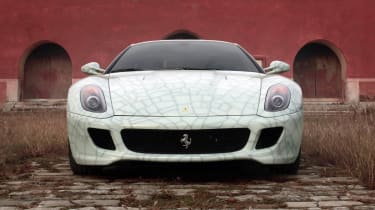 Ferrari has produced a limited edition of its 599 GTB supercar. Called the China Edition, it will be sold to loyal customers in the Far East, with just 12 being made.

In standard trim (pictured red) it comes with two-tone paint, consisting of a Rosso Fuoco body and contrasting grey roof. Inside, there are several nods to the country the car will be sold in, with Chinese characters on key elements such as the rev counter and engine starter button.

The same V12 engine sits up front, so the China Edition will offer up the same scintillating performance as the regular Ferrari 599 GTB. With 611bhp, a 205mph top speed and a 0-60mph dash of 3.5sec, that’s certainly no bad thing.

No prices have been announced yet, but a reasonable premium over the standard car – plus the special edition’s China-only sales, of course – means getting hold of one might be a bit tricky.

Even more exclusive is a one-off car (pictured, white), which is the work of contemporary Chinese artist, Lu Hao. It’s inspired by Ge Kiln porcelain and boasts rather intriguing paintwork. As well as several layers of colour, there are a number of cracks etched into it for the full-on porcelain effect. If you’re a fan, then it’s being auctioned next month at a special Ferrari event in Beijing.