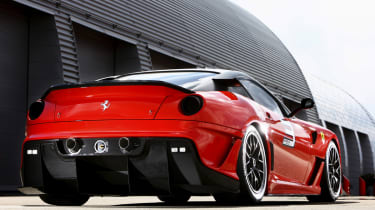 The pricing and options list for the Ferrari 599 GTO have leaked out. The ultra-hardcore supercar is set to boast around 700bhp and should top the Ferrari Enzo’s 217mph top speed. Despite this, it’s going to be (relatively) good value. Expect to pay around £275K for one in the UK, just over £50K more than the 611bhp, 205mph 599 HGTE. In Europe, a 599 GTO will cost 319,495 euros including tax. Convert that to the Queen’s money and you get £286,000, while our supercar and performance prices have been consistently lower than other countries for some time now, so expect to pay a smidge less than that. Quite how many will leave with a receipt for 275 grand remains to be seen – there’s a rather pricey and extensive options list whose boxes are begging to be ticked. Of most interest to us are ‘Racing Stripes’ (6000 euros), ‘Historic GTO Stripes’ (6000 euros) and ‘Colour from 50’s and 60’s Range’ (7050 euros).  There’s the usual array of surprisingly priced stuff, too. Parking sensors aren’t standard (they’ll set you back 1490 euros), while if you want the option to turn off the passenger airbag, that’ll be 400 euros. Rear privacy glass is a mildly shocking 2800 euros when you consider there aren’t any passengers in the back to hide…

Keep your eyes on evo.co.uk for the latest on the 599 GTO, which we’ll have official pictures of soon.

Read about Richard Meaden's road trip in a 599 HGTE

Video: the 599 HGTE does battle with Bentley + Aston

Gen up on the last Ferrari GTO, the utterly lovely 288