New Ferraris on the way 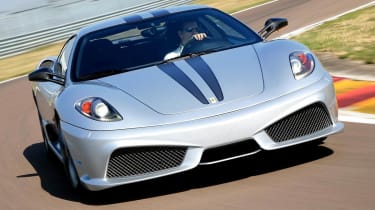 New Ferraris are coming. The company (alongside Fiat and Alfa Romeo) has revealed its product plans for the coming years, and six new models are set to star. Top of the bill will be a successor to the mighty Enzo hypercar, though this time around it’s likely to eschew 12-cylinder power and go back to the turbocharged roots of Ferrari’s previous range-topping F40. There has been talk of direct injection twin turbo V8s and V6s, though the former would seem more likely. The Enzo boasted 650bhp (and the new 599 GTO has 670bhp), so expect an all-new Ferrari hypercar to possess around 700bhp to ensure supremacy among the company’s other cars. The new car is due in 2012. Before then, 2011 will see a Spider version of the 458 Italia and a replacement for the 612 Scaglietti 2+2, with an all-new 599 GTB is due a year later, apparently. 2013 is set to see both a major refresh for the California and a hardcore, Scuderia-style version of the 458 Italia. The standard 458 already trounces the 430 Scuderia for power and performance, so a yet-faster version is certainly something to whet our appetites.

Gen-up on the 288 GTO, one of our favourite ever supercars See the 599 take on its rivals from Aston Martin and Bentley Join evo on our Twitter, Facebook and Youtube pages