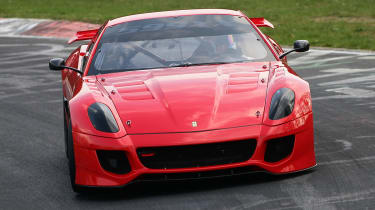 The Ferrari 599XX has blasted around the Nurburgring’s Norschleife circuit in record time, clocking a lap of just 6min 58sec - the first time a production-derived sports car has broken the 7-minute barrier. The 772bhp V12 Ferrari, which costs around £1.2million, was piloted into the record books by Raffaele de Simone, one of Ferrari’s factory test drivers. The Radical SR8 is the only car to have managed anything faster, when it shot to the top of the board in just 6min 48sec back in 2009, though Ferrari rather defensively claims that, as a spaceframe racing car, the SR8 isn’t in the same category as the 599XX. The Radical's road legal, the Ferrari's not. Ferrari has put the 599XX's speed down to its cutting edge traction control system and active aerodynamics at the front of the car, which can increase downforce or cut drag depending on the car’s footing. Travelling at 186mph, the 599XX produces up to 630kg of downforce, pressed into the road by roughly the same weight as Ferrari’s F1 2010 car. The 599XX has inspired the rebirth of the Ferrari GTO name, with a new hardcore roadgoing 599 GTO revealed recently. Click here for gallery and information See evo help Radical to its Nurburgring record on video

Read Chris Harris's blog on the relevance of the record