Ferrari officially reveals the reborn GTO, a 670bhp 599 that's its fastest ever supercar 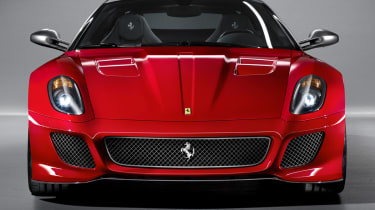 Gran Turismo Omologata. Three words that, when acronymed, should send a tingle down the spine of any supercar fan. The Ferrari 250 GTO and 288 GTO are undeniable classics and irresistible examples of their genre. And now there’s a new ‘Omologata’ joining them in the shape of this, the Ferrari 599 GTO. We’ve been aware of its existence for some time, and we’ve even had a peek at the pricing and options list (news story here) but have had to wait until now for an official unveiling. Muscular looking thing, isn’t it? We were expecting it to look much like the track-only 599XX, but quite how faithful it is impresses. The rear diffuser is particularly dramatic while the bonnet that shrouds its front-mounted V12 engine is intricately sculptured, with extra cooling and a bulge to house optional stripes. Heritage liveries and personalised colour schemes are a standout feature on the 599 GTO’s options list, with scope to create something that looks quite different to the red and carbon car you see here.  The reason to specify a 599 GTO over a GTB isn’t its styling, though: it’s the car’s hardcore nature. It’s Ferrari’s fastest ever road car, both in 0-62mph time (3.35sec) and Fiorano track time (1min24sec), while all of Ferrari’s talk is of how track-focused the GTO is. It is more closely derived from the track-only 599XX, rather than the road-going GTB, and boasts a lot of Formula 1-inspired technology.

Thanks to a revised crankshaft and racing-style intake system, power and torque are now 670bhp (at 8250rpm) and 457lb ft (at 6500rpm), respective rises of 50bhp and 9lb ft, while the car weighs 1605kg, giving a 418bhp/ton power-to-weight ratio, 50bhp higher than the GTB’s figure. The 0-62mph figure has gone sub-Enzo and the top speed is rated at ‘208mph+’. To help haul off all that speed, there’s a set of ‘second-generation’ Brembo carbon-ceramic brakes, with the ABS calibrated for high-speed track use. They benefit from ‘wheel doughnuts’ – discs positioned outside of the brake discs that keep hot air exiting the wheelarch close to the body of the car, reducing drag. A flat underbody and new, separate lower wing incorporated in the front spoiler aid the aerodynamics further.

Gen-up on the 288 GTO, one of our favourite ever supercars See the 599 take on its rivals from Aston Martin and Bentley Join evo on our Twitter, Facebook and Youtube pages