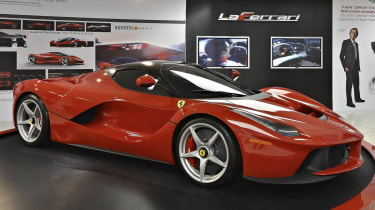 Ferrari's latest hypercar, the LaFerrari was revealed earlier in the year at the 2013 Geneva motor show. Former Formula 1 world champion Fernando Alonso has previously pulled company rank and got behind the wheel of the new McLaren P1 and Pagani Huayra rival at Ferrari’s Fiorano test track, and now he's had another go in a stickered-up car, Ferrari's latest video showing what he got up to.

And it won’t have been much of a comedown from his Sunday driver. With its hybrid drivetrain linking a 6.3-litre V12 engine with an electric motor, the LaFerrari produces 950bhp, 664lb ft of torque and can top 217mph.

The LaFerrari goes straight into battle with the McLaren P1, which runs a similar hybrid setup though with a little less power. 903bhp ought to be enough still, though. Its top speed is identical but its £866,000 price tag is set to be some quarter of a million pound cheaper than the £1million-plus LaFerrari.