Handling pack makes the Enzo-engined GT more composed. But is it worth £14k? 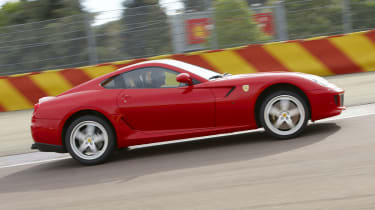 Six-tenths of a second. Slightly less than a sneeze, a bit more than a blink. That’s the difference between the new HGTE edition of the 599 GTB Fiorano and the regular model on a lap around the test track from which both versions of Ferrari’s Enzo-engined, 205mph GT take their last name.

No, it doesn’t sound like much – barely a car’s length, in fact – but think of it this way: the 611bhp 599 is already the best handling GT in the world, powered by one of the greatest engines of all time. If Ferrari didn’t set a limit on the amount of time devoted to thinking of ways that it could be improved (without building a whole new car) the firm’s engineers might have scratched their scalps raw.

Wherever Ferrari wanted to take the 599, diminishing returns were a given and, measured in fraction of a second, 0.6 is a meagre return on the HGTE’s £14,000 premium – hefty even by Ferrari standards. But it seems no challenge is too much trouble for Ferrari’s valiant engineers, and so-called handling packs are not without precedent at Maranello. The 599’s predecessor, the 575M – which initially suffered from suspension that was too soft and biased heavily for the US market – badly needed its ‘Fiorano’ suspension upgrade to fully exploit the performance from its V12 engine. However, the HGTE option for the 599 – which is essentially a suite of suspension, tyre and rim changes – is, at best, a finessing of the 599’s already exemplary road manners, essentially bumping the car up a couple of notches on the hardcore scale. When fitted, it adds a little more involvement, agility and grip – according to Ferrari.

Psychology and timing are the key factors here. The HGTE pack was announced at the Geneva motor show back in March where, conveniently, the frighteningly lairy 599XX model made its debut on the very same stand. The XX is an extreme, track-orientated special, in the fashion of the Enzo FXX, for a tiny band of faithful and ‘hand selected’ Ferrari customers. The halo effect has seldom been more explicitly deployed anywhere.    Spelled out, HGTE stands for Handling Gran Turismo Evoluzione. In hardware terms this means stiffer springs front and rear (by 17 and 15 per cent respectively), a meatier rear anti-roll bar, a 0.4in drop in ride height, half a degree more negative camber at the front and new chunky-looking, five-spoke, three-piece wheels, half an inch wider than before at the front. The Pirelli P Zero tyres are unchanged in size but are made from a new compound that, according to Ferrari, improves grip without significantly harming wear.

There are a couple of software tweaks, too. The magnetic dampers have been recalibrated to act more aggressively and the change time of the AMT paddle-shift transmission has been reduced to 85 milliseconds when the manettino dial on the steering wheel is switched to its Race position – and that’s definitely where you’ll want to keep it.

The electronically adjustable race seats (an option on the regular 599, standard here) look superb and combine terrific support with fine comfort, while an extra smattering of carbon around the cabin provides additional go-faster stimulation for the senses. On the outside, in addition to the lower stance and rather butch-looking wheels, there’s also a new grille, the exhaust pipes each have a carbon-style section before the metal end caps and the front and rear prancing horse badges are burnished rather than polished for a classier finish.

But on the limit is where that extra £14,000  should make its presence truly felt. When you think about it, the 0.6sec advantage on a lap of Fiorano isn’t such a paltry gain. Over ten laps it adds up to a healthy six-second lead, all of which is achieved with no hike in power or any kind of reduction in weight. Not bad for a handling pack alone.

After a demonstration ride beside legendary Ferrari test driver Dario Benuzzi, it’s time for my allotted three laps behind the wheel. They won’t provide all the answers, especially as it isn’t possible to make a direct comparison with a regular 599, but Ferrari’s argument is that the HGTE pack proves its worth through lap times, lateral-g and braking power; it’s not so much about driver involvement or pleasurable handling. On this basis, and on a circuit that doesn’t decisively favour grip and grunt over balance and poise, the HGTE should feel right at home – and it does. Perhaps the biggest grin factor is that the 599 HGTE makes the Fiorano circuit seem easier than it actually is. Immediately reassuring is the sense of balance and seemingly limitless composure. This, along with weighty, communicative steering that commands genuinely accurate turn-in and terrific front-end bite, makes the HGTE more nimble and agile than seems possible for a car with a kerb weight of 1690 kilos.

The big Italian feels beautifully planted and precise everywhere on the circuit, but the defining aspect of the HGTE pack is that the faster you go, the better it gets. The car retains a stunning amount of pace through the fast but tricky second and third bends of the Fiorano circuit, which is underpinned by an unerring feeling of stability and faithfulness. Braking power is no less impressive, too. Best of all, though, is when you switch the manettino to its ‘all off’ setting and find the 599 HGTE is as easy to hold in a long, languid power slide as an MX-5.

If none of this translated to the road, it wouldn’t make much sense, but the balance is finely struck. Yes, the ride is firmer but it’s never intrusive or harsh. The abiding impression is of a regular 599 with a more muscular chassis to match its phenomenal engine, which, incidentally, has never sounded better, because Ferrari has kindly re-tuned the exhaust for good measure.