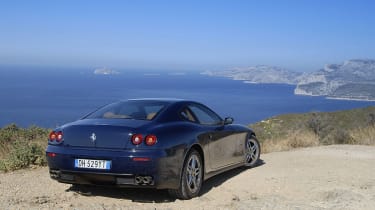 Outside the Hotel de Paris in Monte Carlo’s famous Casino Square, the crowds of tourists with camera phones seem ignorant of the fact that most motoring journalists don’t rate the looks of the 612 Scaglietti. They’re as happy to pose alongside the slightly ungainly 2+2 Ferrari as they are to cosy up with the F430 Spider and Lamborghini Gallardo Spyder sat on the other side of the valet parking zone.

Perhaps they’ve clocked that the pair of 612s on sentry duty outside the hotel entrance are sporting the rarely seen HGTS and HGTC options packs. Maybe they’ve noticed the chromed mesh grilles down by the tailpipes and the ball-polished split-rim alloys that are the visual identifiers of both cars, or the red Brembo callipers and carbon-ceramic discs of the HGTC. A more likely explanation, of course, is that simply having a prancing horse on the bonnet is enough of an excuse to switch the Nokia over from an audio to a visual device.

However, some have found that the standard, £182,952 Scaglietti hasn’t quite been enough of a Ferrari. An outstanding car, yes, especially for one so large, but lacking that last 10 per cent of twinkle that could elevate it to the ranks of Maranello’s brightest stars. With luck, the handling packs, particularly the HGTC with its fancy brakes, will make up the deficit.

Both the HGTS (£7505) and HGTC (£15,675) share the same basic upgrades. There’s a new, sportier exhaust system, model-specific tyres, a gearshift strategy 10 per cent quicker than the standard 612’s, stiffer anti-roll bars, firmer settings for the electronically controlled dampers and a more laissez-faire set of parameters for the traction control, most noticeably when you hit the ‘Sport’ button on the steering wheel. Tick the box for the ‘C’ pack instead of the ‘S’ and, in exchange for your banker’s draft needing an extra eight grand adding to it, you’ll receive a quartet of drilled and vented carbon-ceramic discs complete with Brembo callipers.

As it happens, braking performance and the noise the standard 612 makes are about the only real complaints we have about Ferrari’s four-seater – well, if we leave aside the matter of how it looks – so if the specification changes fulfil their on-paper promise then we’re in for a cracking drive.

The new exhaust system is an instant hit; its effect is like removing some form of sophisticated filter responsible for rounding off all the 5.7-litre V12’s interesting aural edges, thus exposing a sharper, crisper, more stimulating sound full of rich melody and sonic punch. Now, this is what a V12 Ferrari should sound like. And it makes the Scaglietti seem even quicker.

In theory the swifter gearshifts should actually make it quicker, but the difference is so small it’s hard to tell. The F1 paddleshift set-up (massive paddles, by the way) retains its love/hate status. To prevent yourself looking like a nodding dog during upshifts you need to lift off the throttle momentarily, as in a manual, but it does mean tuning your brain in quite carefully to the workings of the gearbox. However, it’s a delight going back down the gears, the electronics blipping the throttle for you with each shift and slotting between cogs as quick as you like during heavy braking.

What transforms this car, if you’re a hard driver, are the ceramic discs. As with the standard steel jobs, the initial part of the pedal travel is a bit lifeless, but then you get hard, progressive retardation that you are free to enjoy time after time after time. That latter quality is what really counts, because up on the mountain roads behind Nice the standard brakes began wilting under the weight of the car on downhill runs; the ceramics remained indefatigable from summit to valley floor.

Being able to rely on the brakes that way encourages you to use the Scaglietti even harder. The retuned suspension finesses what is already an excellent chassis, adding tautness, promoting a to-the-limit driving style. In the HGTC (and the HGTS), even more so than in the standard car, you promptly forget you’re in a large four-seater and attack each corner as though you’re behind the wheel of a supercar.

The HGTC pack realises the full and considerable potential of the Scaglietti, and in the grand scheme of Ferrari things, the extra it costs over the standard car is piffling. All the 612 needs now is a facelift.