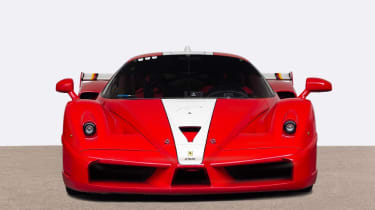 A Ferrari FXX with Michael Schumacher’s signature on the bonnet is to go under the hammer at an auction in Munich on 26 September. Car 29 of 30 was built in 2006 and signed by the seven-time Formula 1 World Champion in what was his final year at Ferrari. Auctioneers expect it to sell for £1.5million.

Since car 30 was given to Schumacher, this FXX the last ever customer car to be produced. But interestingly, its first owner was Ferrari itself – the car was commissioned by the factory to be used for research and development.

As such, it spent much of the first part of its life hammering around Ferrari’s Fiorano test track and Monza. During this time a small crash meant the front-right corner had to be rebuilt, but any concerns for a shoddy job can be quashed – the car was of course repaired in the Ferrari factory. 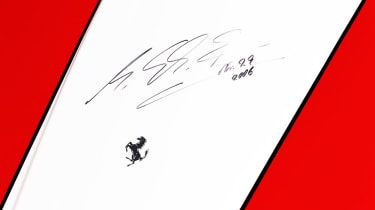 After its Ferrari ownership, the car was sold to a private collector in 2007 and has since taken part in numerous Ferrari Racing track days. Despite its active life, the car has still only covered a total of 1500 miles. It’s in totally original condition, and appears to have escaped Ferrari’s Evoluzione modifications (which reduced drag and upped power with upgrades made available in 2009).

Given its mix of Ferrari factory history and the fact it bears the signature of a racing legend on its bonnet, it’s perhaps unsurprising to see that auctioneers expect it to fetch more than £1.5million when it goes under the hammer. Admittedly, FXXs cost £2million when new, but this did buy customers into the XX programme – which included trackside support and maintenance. 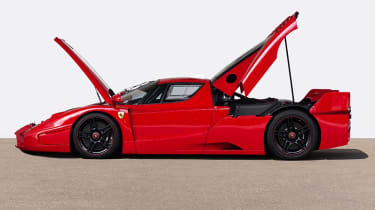 Though the FXX is based on the Ferrari Enzo, its atmospheric V12 was substantially further developed – it grew from 6 to 6.2 litres, increasing power by 148bhp to 809bhp at 8500rpm. The car’s chassis and body were also honed for track use, reducing weight and increasing downforce to make the FXX a serious track-weapon. Ferrari claimed that it could sprint from 0-62mph in just 2.5sec and on to a 214mph top speed (Evoluzione cars could theoretically reach 250mph), and could lap Fiorano in 1min 18sec, 6.9sec faster than the Enzo.

The FXX’s successor, the FXX K, was revealed last year in Abu Dhabi. Though that car – which is based on the LaFerrari hypercar – is much faster thanks to its more powerful hybrid V12 powertrain and active aerodynamics, Ferrari test driver Marc Gene told evo at its 2014 launch that he’d take the older car: ‘the first time I drove the FXX I fell in love with the car. Its V12 engine – no car sounds like that anymore’.