Ferrari replaces the 599 GTB with the new F12 Berlinetta supercar, its most powerful road car ever. Live Geneva show news and pictures 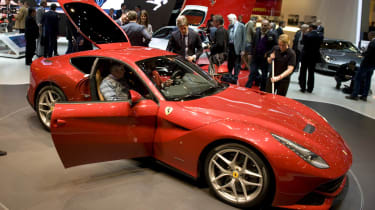 Ferrari has officially unveiled the new F12 Berlinetta at the Geneva motorshow, with its new V12 flagship set to lift the brand into new performance territory.

The headline figures are stunning: the F12’s 6.3-litre V12 engine produces 730bhp, without recourse to turbocharging, over 60bhp more than the seminal Enzo. Peak power arrives at 8500rpm, yet despite that the engine has a very high 13.5:1 compression ratio, made possible by extremely advanced direct injection and ignition systems.

The F12 Berlinetta is seen by Ferrari as a technical flagship, and this engine will form the basis of the powerplant in the ‘next Enzo’, due later this year. It uses a spaceframe chassis and aluminium body that incorporates 12 different grades of alloy, some of which are being used for the first time in a car. Overall weight has been kept to just 1525kg, and Ferrari claims that the new body is 20 percent stiffer than that of the 599.

Performance is set to be every bit as astonishing as the engine’s prodigious output suggests. Ferrari claims a 3.1-second 0-62mph time and a 0-125mph (0-200 km/h) time of just 8.5 seconds. Despite that, we’re also told that fuel economy has been boosted by up to 30 percent compared to the 599, with the ‘combined’ economy figure of 18.9mpg (and CO2 emissions of ‘just’ 350g/km) putting it at the top of its rarefied segment.

We’re also told that aerodynamics play a major role in both the F12 Berlinetta’s performance and also it’s design. At the front the bonnet incorporates what’s known as an ‘aero bridge’ to develop downforce and also a blown diffuser. The net result is claimed to be 123kg of downforce at 125mph and a co-efficient of drag of just 0.299. It also features active cooling for its standard carbon ceramic brakes, with ducts opening to direct additional airflow at high temperatures.

There are no details on pricing yet, but the car will be going on sale later this year. Best to start saving, then.