We drive the 730bhp Ferrari F12 Berlinetta, one of the strongest contenders for our 2013 Car of the Year title 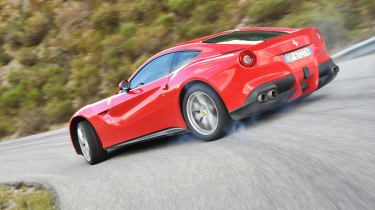 The Ferrari F12 Berlinetta is Ferrari’s replacement for the 599 GTB and the company has thrown everything at it to ensure it’s vastly quicker than its seminal predecessor, but also that it’s more enjoyable at low speeds. It claims to be both GT and supercar, mixing front-engined packaging and civility with exotic, F1-inspired dynamic ability. The headlines are that’s it’s considerably smaller (50mm shorter, 60mm lower, 20mm narrower and with a 20mm shorter wheelbase), 70kg lighter at 1525kg (dry), produces more downforce and has a much lower centre-of-gravity. But you’ll need to have exceptionally deep pockets to get into one: it costs from £239,352. See it compete in our 2013 Car of the Year contest here.

Where to begin? Let’s start with the V12. Similar in size to the Ferrari FF's engine but significantly re-engineered to produce more power, rev higher and ensure much quicker throttle response. It produces an almost unbelievable 730bhp at 8250rpm (it revs to 8700rpm) and 509lb ft at 6000rpm. All that mumbo is transmitted to the 315-section rear tyres via a 7-speed dual clutch transaxle and Ferrari’s E-Diff – the 599 made do with a single clutch ‘box and a normal mechanical limited slip differential.

The results are startling: 0-62mph in 3.1-seconds, 0-124mph in 8.5-seconds and a top speed of over 211mph. Those acceleration figures put it ahead of a McLaren F1. Around Fiorano it’s faster than an Enzo or even the ultra-extreme 599 GTO.

Of course there’s so much more. The F12 gets the latest evolution of Ferrari’s adaptive magnetorheological dampers (SCM-E), which react much more quickly, improved carbon-ceramic brakes and, as ever, the relentless evolution of the many traction and stability systems sees huge gains in control and speed. Then there’s the already famous ‘aero-bridge’ – ducts set into the front wings – which reduces drag and improves downforce, plus active brake cooling ducts that only open when the discs are getting really hot, to reduce drag. The list of technical highlights is almost endless. Ferrari has retained an aluminium chassis for the F12 but new materials increase stiffness and reduce weight.

The aim was to create a car with mid-engined agility (and traction) but in a more usable package. Ferrari’s V12 customers tend to do higher mileage than those rather gauche V8 clients, apparently.

It weighs 1600kg but it’s as thrilling as a Caterham 620R. A large part of the answer of how lies under the aerodynamic bonnet. It’s hard to imagine an engine that’s even more unhinged than the Mercedes SLS Black’s hand-built V8, but by the end of the first straight it’s clear that the F12’s 6.2-litre V12 is just that. The Ferrari can and will break traction more than the SLS and at times every stab of the throttle feels about as wild as throwing petrol bombs into a bonfire from close range. No, closer than that – so that your eyebrows are in danger.

There’s also some pitch and roll in the chassis, which makes it feel like much more of a road car than the AMG, although the damping’s beautifully supported so you can actually lean into it reassuringly and use the suppleness to your advantage. When you’ve built a bit of confidence, you find yourself getting on the power early out of every corner so that the F12, exploiting that lovely front-engined rear-drive balance.

It’s fair to say the Ferrari F12 has the best drivetrain of any road car on sale today. The way its dozen cylinders rev with apparently no inertia is insane and the twin-clutch gearbox not only keeps up, but actually enhances the experience. It feels like all 730bhp are in full health. Amazingly the traction is also very trustworthy and on a scorching hot and dry day you can really feel the E-diff hunting for drive and digging you out of corners.

But although the engine and clever drivetrain dominate the experience, it’s supported by a seriously capable and exciting chassis. Ferrari has gone for a super quick steering rack ratio, which almost seems laser-guided at lower speeds but falls just the right side of twitchy, allowing you to slice through roundabouts with a startling economy of movement in your hands. It all takes some getting used to and never feels totally natural, especially in high speed corners. However, hiding beneath that sometimes too-aggressive response is superb balance and a good degree of suppleness, too. I can’t think of a more agile front-engined, rear-drive car with big firepower. What’s really impressive is that the very pointy front doesn’t upset the rear until you’re literally throwing the car between direction changes. Even then, the rear tends to adopt just a shade of oversteer that barely needs correction.

Of course with so much power on tap there’s proper oversteer to be had should you want it - and with the stability control systems turned off. Be sure you do really want it though, because even those trick Michelins will spin and spin and spin and… SPIN as the V12 ramps up towards peak power. It’s massively entertaining but needs real concentration to fully exploit. Get to grips with the F12, though, and on warm tarmac it is an absolute oversteer king. The front end simply jinks into a turn without question and then you can post the car sideways at will with the throttle. The E-diff is sensational in the control it gives you over the rear axle, and once you’ve got the rear tyres spinning, it feels like you can just keep them overspeeding all the way up the road, even swinging through direction changes.

The F12 is so fast and brutal in response to the smallest input that you are constantly busy, and it is definitely more supercar than GT. There’s a welcome layer of everyday usability, too, though. But it certainly feels a happier car when you come across a long, dark tunnel. Windows down, flack, flack, flack on the left-hand paddle, pin the throttle and instantly you could be in Monaco in Grand Prix week. From the screaming exhausts as you’re hurled through the darkness, to the loud crack as a gearchange fires through and extinguishes the red LEDs on the top of the steering wheel, the F12 is pure race car. For a few brief seconds of acceleration it completely fills the tunnel, howl reverberating off the ceiling, the noise gaining that distinctive cavernous echoing depth before shrinking in an instant as you burst back out into the daylight. Incredible.

During its time in our Car of the Year 2013 test, the F12 acquitted itself very well, in the end taking second place, just missing out to the Porsche 911 GT3. Mike Duff commented: ‘Wow. The most exciting car here for me, by a fair margin. The V12 is amazing: the fact it produces so much power through nothing more than revs and direct injection feels close to miraculous. I don’t think the novelty of running it out to 8500rpm and feeling the brutal gearbox bang in the next ratio would ever wear off either. Every time I got out of it I had an adrenalin high.’

Most judges sang the praises of the V12. ‘It is a total triumph,’ said editor Nick Trott. ‘Ferrari should be honoured for building arguably the greatest road-car engine of all time.’ David Vivian was equally effusive: ‘The powertrain is surely the most remarkable, exciting and addictive of any car on sale today. It isn’t just the power, staggering as that is, but the manner of its delivery. The final 2000 revs to the red line and the speed of the shift to the next gear are truly breathtaking.’

With a Ferrari 599 GTB? It’s on another planet. Faster, with much better traction, greater agility and more feel through every control… and Ferrari should be congratulated for making the F12 so much more compact. It feels tiny on the road compared to the 599 (while still offering plenty of cabin room and a big boot, though) and that will be a huge bonus in the UK.

With a Lamborghini Aventador? It’s surely not as dramatic but it’s every bit as quick and is more exciting to drive hard and easier to drive slowly. In truth they’re very different cars. On a wintry day in the UK I reckon the Aventador might feel more trustworthy, but the F12 is certainly the more exciting, more precise and more adjustable drivers’ car. Another alternative is the latest Aston Martin Vanquish, a 5.9-litre V12-engined GT car that can’t compete with the F12 on pure firepower and thrills, but it makes a very appealing case for itself with svelte and subtler looks, it’s gargling growl is easily a match for the Ferrari’s wail in tone, at least, and its brilliant balance and well-judged grip levels make it friendlier and more approachable than the F12.

As with the Ferrari 458 Italia, the F12’s near £240,000 starting price is only the beginning. Launch control, a reversing camera, dual-zone air conditioning and Bi-Xenon headlights are all standard fit. But carbon racing seats add £5184, a premium stereo is £3552, a carbon cup holder is £2112 while an official Ferrari F12 golf bag will set you back a faintly dizzying £6240. A £300,000 F12 wouldn’t take much options box ticking at all. 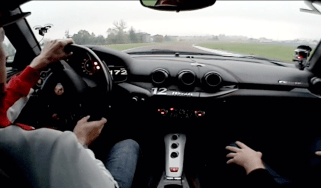 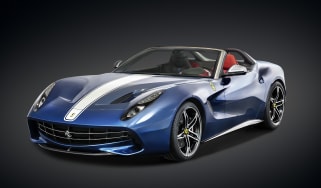 Ferrari has unveiled an ultra-exclusive, F12 based soft-top to the American market
Visit/ferrari/f12-berlinetta/13882/ferrari-f12-trs-one-off-special 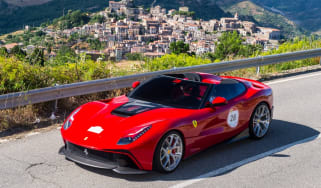 A speedster version of the Ferrari F12 appeared at Goodwood 2014. Meet the wild TRS
Visit/ferrari/f12-berlinetta/12334/geneva-2012-ferrari-f12-technical-details 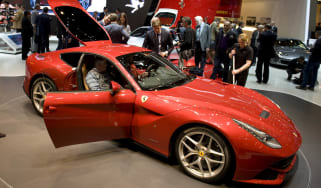 Ferrari replaces the 599 GTB with the new F12 Berlinetta supercar, its most powerful road car ever. Live Geneva show news and pictures
Advertisement
Skip to HeaderSkip to Content