A speedster version of the Ferrari F12 appeared at Goodwood 2014. Meet the wild TRS 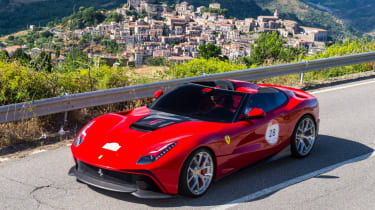 Ferrari has revealed its F12 TRS. A one-off model unveiled at the third Ferrari Cavalcade event, it is a more extreme version of the F12 Berlinetta, produced at a client’s request. Taking inspiration from the 1957 250 Testa Rossa, it’s designed to be a more modern version of the two-seat, open-top sports Barchetta.

The F12 TRS has performance figures equal to those of the F12 Berlinetta. Its 6.3-litre V12 produces 730bhp and 509lb ft, endowing it with a 3.1sec 0-60 time, 0-124mph taking 8.1sec. The F12 also looks the part brandishing the signature sharp Ferrari nose with a dark contrasting windscreen. The mighty V12’s red cylinder heads are visible through an engine lid window, a styling flourish borrowed from Ferrari’s mid-engined V8 supercars, most recently the 458 Speciale.

The car has been stripped to the ‘barest driving essentials’ creating a lighter, sportier cockpit at the expense of comfort. Ferrari has cut back air conditioning controls and completely removed the glove box, window controls and audio system amongst other things. The interior consists primarily of black matt carbonfibre, leather and Alcantara. The classic red paint of the exterior is also utilised on the door panels and central tunnel.

The F12 TRS made its first major public appearance at the 2014 Goodwood Festival of Speed, attracting plenty of attention as it completed the famous hill climb. Previous Ferrari one-off specials include Eric Clapton’s Ferrari SP12 EC, based on the 458 Italia. The SP12's estimated £3million price tag gives a strong indication of what the TRS may have cost its owner.