Ferrari has unveiled an ultra-exclusive, F12 based soft-top to the American market 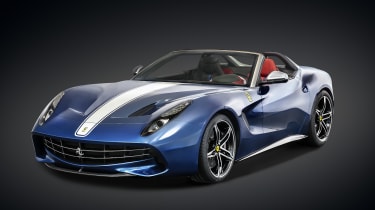 Ferrari unveiled a limited edition V12 open top sports car at a swanky gala dinner in Beverly Hills. Named the F60 America, the car has been produced in celebration of Ferrari’s 60-year presence in North America and will be produced as just 10 examples.

Though a soft top suggests it could be a special version of the California, what’s under the bonnet ensures it’ll be far more savage. The 6.3-litre V12 powerplant – which can sing all the way up to 8700rpm – and much of the running gear has been borrowed from the Ferrari F12 Berlinetta, sending the same 730bhp and 509lb ft of torque rewards through Ferrari’s rapid-shifting seven-speed dual-clutch transaxle with E-Diff.

Outside, the new car seems to mix the stance of the California with lines of the F12 on which it is based. Towards the rear, two forward angled roll-hoops bleed back onto a tail that resembles a chopped F12’s. Below, two pairs of twin exhausts poke out either side of a rear-diffuser with an F1-style fog-light in the middle. Up front, the nose features more F12 influences, with the grille, headlights and swooping bonnet all bearing strong resemblance.

The F60’s bodywork is all aluminium, as is its F12 based chassis. Designed with the lifestyle of its wealthy buyers in mind, the F60 America comes with a removable fabric-top that can be used at speeds up to 75mph.

It all looks rather nice outside, but it’s the inside where things get a bit out of hand. In an effort to resemble the driver-focused cabins of Ferrari’s historic racing cars, the cabin is part trimmed in red, and part in black. It’s the driver’s side that falls victim to the brightly coloured dash trim, whilst the passenger is faced with less brash black leather and red stitching.

The American focus is shown with Stars and Stripes trim running down the centre of the seats, whilst the usual array of clutter-free Ferrari switchgear returns with a dash layout that again seems to be borrowed from the F12.

All 10 cars have already been sold, with no prospect of more being produced. Ferrari says it’s created just 10 F60s to pay homage to classic US-focused cars like the 1967 275 GTS4 NART and open version of the 275 GTB which also sold as 10 in the American market.

The F60 America cost £1.56 million, comfortably surpassing the F12’s £238,938 starting price at over six-times the value. The covers were pulled off on 10 October at the event which also saw the first Ferrari 458 Speciale A sell for over £560,000. Proceeds from that have been given to 'Daybreak,' the US branch of an Italian charity focused on finding cures for rare genetic diseases.