It could just be the purest expression of Ferrari right now 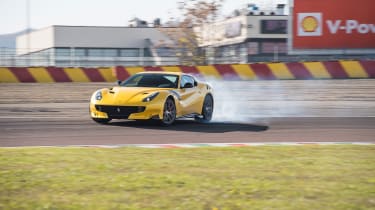 The iconic Tour de France name is resurrected for an extreme version of the F12. Faster, lighter and packed with new technology, it’s a mouth-watering proposition. So can it live up to the huge expectation?

Pure automotive pornography. Sorry if that sounds crude but the Ferrari F12tdf exudes a desirability and aggression that might make it the most desirable car on sale today. It’s got the glamour and inherent balance of a big front-engined rear drive machine, the breathless excitement of a normally aspirated V12 and so many cuts, slashes and aero devices that it reeks of motorsport and technology. Ferrari will produce 799 of the F12tdf at £339,000.

Lighter, more powerful and showcasing a new four-wheel steering system but unencumbered by weighty hybrid technology or turbocharging, it should be the purest expression of Ferrari right now.

The F12tdf ups the ante considerably over the standard F12 in terms of drivetrain performance, aerodynamics, lightweight materials and solutions and, of course, chassis dynamics. The basics statistics are that power from the 6.3-litre V12 is up to 769bhp at 8500rpm (from 730bhp) and 520lb ft at 6750rpm (from 509lb ft), the 7-speed dual clutch transmission cuts shift time by 30-percent on upshifts and 40-percent on downshifts and the gear ratios themselves are shorter by 6-percent. Ferrari claim the tdf reaches 62mph from rest in 2.9-seconds and 124mph in 7.1-seconds. The top speed is ‘over 211mph’. 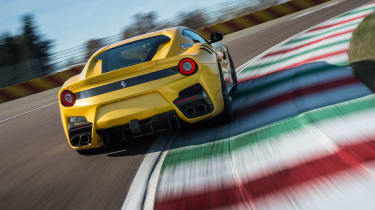 The drivetrain looks set to be extraordinary then, as the standard F12 is already relentlessly fast and endowed with stunningly sharp responses. However, those gains are enhanced still further by a 110kg weight saving, meaning that the tdf weighs in at 1415kg dry (although that number is with ‘optional lightweight’ equipment). As you’d expect carbon fibre is the key here. It’s used for the front and rear bumpers, the ‘Aerobridge Evo’ device on the front wings and the underbody aero and is used extensively for the interior, too.

>Read our full review of the Lamborghini Aventador SV here

The chassis and aerodynamic work is perhaps even more impressive. Ferrari has increased the front tyre size from 255-section to 275-section (it runs the new Pirelli P Zero Corsa) but then claims to have mitigated the increased ‘oversteer on the limit’ that the extra front grip could create with the new ‘Virtual Short Wheelbase’ four-wheel steering system. In fact this is a bit of a misnomer. The ‘short wheelbase’ feel has been realised by increasing the front end grip and working on the mechanical grip and agility in general.

The four-wheel steering system is used to control the newfound responsiveness, the rear wheels steering in the same direction as the fronts for stability, not in the counter direction for agility. Perhaps it should be called Virtual Long Wheelbase. Either way Ferrari claim this creates a car with the outright response of the old 599 GTO but with a much more predictable, exploitable feel that should suit all levels of driver ability. Of course the 3rd generation magnetic dampers are retuned, the springs are around 20-percent stiffer and the tdf benefits from new Extreme Design brake calipers from the LaFerrari. 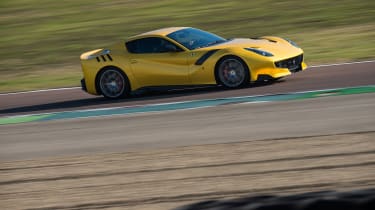 In terms of aerodynamics the tdf’s pretty extreme styling is functional as well as deliciously aggressive. Downforce is up by a claimed 87-percent to 230kg at 124mph. You can see many of the aero upgrades – from the redesigned front splitter with dive planes to the more extreme Aerobridge treatment channeling air from the bonnet down the sides of the car and the new active rear diffuser that can be stalled to reduce drag -– but the lengths to which Ferrari has gone are illustrated by the more steeply raked rear screen, altered to increase the extended rear spoiler’s working area. In simple terms Ferrari has thrown everything at the F12tdf, just as you’d hope and expect.

The launch programme for the F12tdf was limited. It consisted of 4 fast laps of Fiorano and then around 2 hours on the roads nearby. With the demands of photography that 2 hours quickly dwindles! I know, there are tiny harps crying out in sympathy… but I just want to give you a picture of the time because the tdf is a complicated car and I still don’t feel like I’ve got all the answers.

Initially on the circuit it feels sharp-edged, unnatural and very, very edgy. Partly that’s because when you have only 4 laps you want to immediately get up to a good pace and tend to overdrive in order to do so. But mostly it’s because the tdf has extreme front-end grip, instant response and seems to leave little room for error. So before you can think the car has pointed itself at the apex, the rear of the car is moving into what feels like a big oversteer moment and you find yourself sawing at the wheel to keep everything under control. Dial back the pace and instead of stabbing in oversteer corrections you find yourself struggling to just steer a smooth arc around any given corner – turning each instead into a giant 50 pence piece. Far from flattering your mistakes, the tdf almost seems to revel in magnifying them. 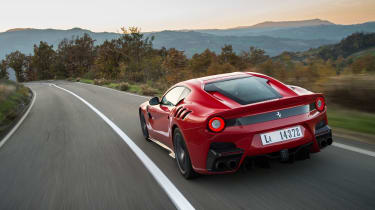 >Read our full review of the Ferrari 458 Speciale here

With time this nervousness subsides… never quite disappearing but you slowly tune into the car’s rate of response, start to drive very much with your fingertips and the tdf begins to feel smooth and balanced rather than serrated and angry. However, the extra front and rear grip and the much greater body control create a very different feel and balance to the normal F12. It’s not an indulgent car, doesn’t want to play big, big oversteery slides. Instead it’s neat and precise but with this edge, this spikiness never too far away. It demands respect and thought. You don’t just drive the tdf on instinct but instead find yourself trying to figure out the best way to get it through each corner… On track at least I never quite felt on top of the car. Never fully immersed in the unfolding action.

Of course the drivetrain is mesmerising. What an engine! For me the throttle response is a little too sharp if the manettino is wound around to Race, CT Off or ESC Off, but in every other way it’s a magnificent experience. The deep, insistent torque and then the frenzied, savage way it winds around to the 8900rpm limiter is just unmatched.

You’ll read lots about new generation turbocharged engines in the 488, in the new 911 and many other cars in the weeks and months to come and some people will try to tell you that forced induction is so good now that it hardly matters… They’re lying to you and the F12tdf is proof positive that for excitement, response and the sorts of noises that make you want to jump for joy, nothing beats a big normally aspirated engine. Nothing. Married to the scintillating dual-clutch transmission it’s a joyous, almost terrifyingly potent package.

>Read our review of the Ferrari 488 GTB here

Out on the road the F12tdf does feel extreme, perhaps more so than we’d even expected. The ride is composed, almost supple on smooth surfaces but on lumpy, narrow roads it feels much more aggressive than even something like the 458 Speciale. It seems that by creating such immense steering response and eliminating any trace of understeer Ferrari has to be sure that the F12tdf is in control of its weight for every millisecond, demanding a pretty uncompromising set-up.

The result is that the car isn’t as fluid we’ve become used to from Ferrari. It requires time to understand and recalibration of your senses to tune into the messages present as it changes direction… They’re bubbling away in the steering and through the seat and of high quality, but such is the speed of what’s going on it’s easy to miss them and then the tdf can seem wildy fast and effective but unwilling to fully communicate with the driver. And such is the car’s potential you need to be fully in the loop or confidence can quickly dwindle. 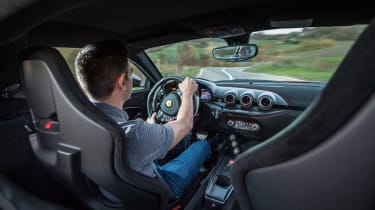 As you can tell, the F12tdf is a fascinating but not instantly intuitive car to drive quickly. It’s also a car that requires you to adapt to its responses, to learn to trust in the four-wheel steering system and to respect that 769bhp going through rear tyres without an engine pressing above them requires finely considered deployment. It has masses of grip, staggering reflexes, superb traction and immense control but what lies beyond is never too far from your mind. It’s a challenge but one with real rewards… Put it this way, we really want to drive it again to try to unpeel more and more layers of its ability.

The drivetrain is out of this world. A Lamborghini Aventador LP700-4 isn’t even close. The chassis is incredibly capable but doesn’t feel as transparent as a McLaren 675 LT… But are those the right benchmarks? It really is a unique proposition.

The pasta at the Montana restaurant nestled beside Fiorano tastes nearly as good as an F12tdf sounds at 8500rpm.