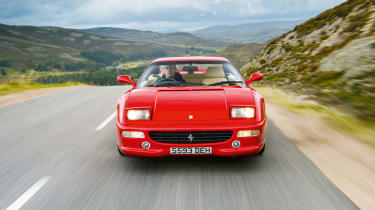 Tony Glynn at Ferrari specialist Foskers says the flat-plane-crank V8 gives very few issues provided it’s serviced on schedule – which means an oil change every year and belts every three. It is possible to change the belts without taking the engine out, but Foskers recommends removal because it allows you to spot any developing issues – oil or water leaks, for example – and also check the condition of the steel subframe.

‘The one weakness they have is the exhaust manifolds cracking, which makes the car run hot and can result in burnt-out valves,’ says Tony. ‘It gets noisier and becomes very fluffy on idle. When we look at a car, we always do a compression check and leakdown test. Replacements are about £1000 a side, plus fitting, so around three grand to replace both.’

Early cars suffered premature valve-guide wear. In most cases they were replaced with a later type, but some very low-mileage cars may still have the originals. Again, a compression test will show up issues. 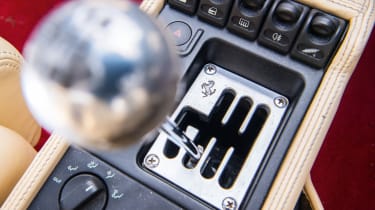 Note that the ECU was updated in 1996. The earlier ‘M2.7’ cars have sharper throttle response; the later ‘M5.2’ cars are smoother but, some say, underperform on power.

Manual or F1, it’s the same six-speed ’box; the difference is that in the F1 the single dry clutch has electro- hydraulic activation. The actuators sometimes need replacing on higher- mileage cars, so shift manually up and down the ’box to check for any hesitancy. The hardware itself is generally robust. ‘Clutches typically last about 20,000 miles on a manual and 15,000 on an F1, but if you’re doing a lot of motorway miles you could get up to 30,000,’ says Tony. With the F1, a dealer or specialist with diagnostic gear can tell you how much clutch life is left. A replacement costs around £1300.

Check the dampers switch between Comfort and Sport modes. Ball joints inevitably wear, so listen and check for play. The wheels are magnesium alloy, which means a refurb costs more, so examine them closely.

The biggest worry is the steel subframe that carries the engine. ‘You can see quite a bit by shining a torch around the engine bay,’ says Tony. There’s also a weak-spot where the steel buttress running down from the roof meets the aluminium rear wing. ‘You probably need to repair and repaint that every five years to keep it tip-top, and it’s around two grand to do a good job.’

‘A common problem is with the rubber coating on the switchgear, door handles and air vents, which goes sticky if cleaning fluids are used,’ says Tony.