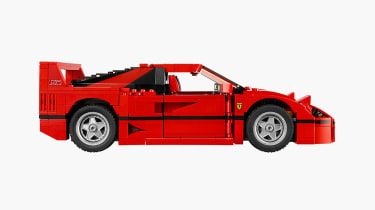 Despite competition from videogames and tablet computers, Lego has never been more popular. Savvy marketing has resulted in numerous tie-ins with some of the world’s biggest companies and kept the little bricks as fresh as they’ve ever been.

Still, there are some Lego creations that make evo sit up and take even more notice. One of those is the newly-launched Lego Ferrari F40, part of the Lego Creator range.

Oh, and it’s red – undoubtedly the F40’s most iconic colour scheme, complete with red seats and spartan interior design. In fact, it’s very much like the car Jethro Bovingdon recently drove in our F40, Speciale and 488 GTB video.

While the real F40 was the work of Leonardo Fioravanti at Pininfarina, Michael Psiaki devised its Lego equivalent. Talking about his creation, Psiaki described the difficulty in recreating the car’s subtle curves from square-edged bricks.

‘The more I worked on this model the more I noticed how many subtle curves there are in the car. The car gets slightly wider and taller as you move towards the back. We managed to pull this off with a clever angled section just behind the doors.’

He also describes the front clamshell as his favourite element of the Lego car, which includes two intakes just like the real vehicle. That, and the engine cover, turned out to be the hardest parts of the model to design – ensuring they both looked good, and were strong enough to avoid turning into a pile of bricks when they’re opened…