Ferrari has removed the roof from its 812 Superfast to create the 812 GTS, a V12 spider with real  supercar intent 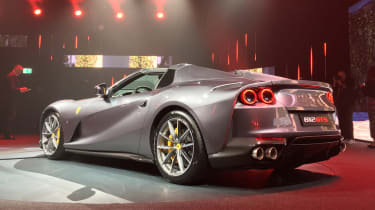 Ferrari says it’s been fifty years since its last front-engined V12 spider. It then goes on to point out that since that car - the Daytona Spider - it has made four others that fit the description: 2000’s 550 Barchetta Pininfarina, 2005’s Superamerica, 2010’s SA Aperta, and 2014’s F60 America.

Confused? Don’t be, because while each of those was a special, limited-run model, the new Ferrari 812 GTS is the real-deal - a volume production spider with a front-mounted V12, and the first to legitimately hold that title since the aforementioned Daytona.

None, special models or otherwise, have been quite as extreme as the 812 GTS however. Sharing its powertrain and architecture with the 812 Superfast, the 812 GTS makes use of a 6.5-litre naturally-aspirated V12 with an 8900rpm ceiling and a scarcely believable 789bhp delivered 400rpm before you reach it.

The only thing louder than the engine will be the expletives you utter on the way to 62mph in “under three seconds” and 124mph in 8.3, the former figure just a tenth behind the Superfast. While the engine is undoubtedly a screamer, its 6.5 litres of capacity and twelve creamy cylinders also give it 529lb ft of torque, the 7000rpm peak slightly deceiving when Ferrari says 80 per cent of that maximum is available from half those revs. Top speed is quoted as 211mph - identical to the coupe.

For emissions reasons the V12 is equipped with petrol particulate filters, but rest assured that Ferrari has tuned the two six-into-one manifolds and exhaust system geometry to ensure it still sounds its best.

And of course, the GTS is an open-topped car, with a retractable hard-top that stows or emerges in 14 seconds at up to 28mph. Like other recent Ferrari spiders, the 812 GTS resorts to using a buttressed tonneau cover to hide the retractable panels, and this does have the effect of ditching the Superfast’s vents near the quarter windows (a new vent in the diffuser makes up for their loss), and doing away with the large glass panel that used to sit over the luggage area. 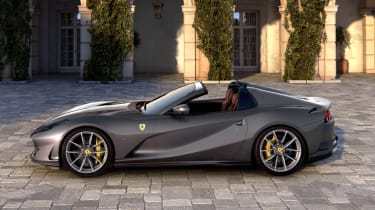 The roof, tonneau cover and luggage compartment have all been redesigned accordingly, but otherwise, the roof’s profile isn’t dissimilar to that of the hard-top. Elsewhere the GTS’s styling is as-per its fixed-roof sibling - think long bonnet, high tail, and a hyper-aggressive, dart-like appearance that’s imposing and purposeful if not traditionally beautiful. You do get a new design of alloy wheel however, with diamond-finish, silver, and Grigio Scuro colourways.

The cabin is unchanged from the coupe too, hole above your head notwithstanding, which means shapely and surprisingly comfortable seats, a large tachometer in front of the driver, an auxiliary display for the passenger, and high levels of quality.

Ferrari says it’s worked hard to minimise turbulence and noise inside the car (bad noise, at least) when the roof is down, with careful work to those buttresses to ensure they don’t generate hurricane-force winds behind your head.

Dynamically the GTS should be little changed from the Superfast, with the same electronic systems. That includes the use of Side Slip Control, and Virtual Short Wheelbase 2.0 - Ferrari’s four-wheel steering system, that gives the Superfast uncanny agility. The dampers, meanwhile, have been subtly tweaked to account for the 75kg weight penalty in GTS form - giving the GTS a dry weight of 1600kg and a kerbweight around the 1705kg mark.

Full pricing and specification details haven’t yet been announced, but expect a healthy premium over the Superfast’s £262,963 basic price.

Here's our verdict on the best convertible cars on the market today...