Customers will play spot-the-difference, keen drivers will have to wait for an Abarth. Updated with our expectations. 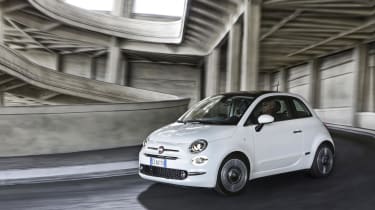 There’s a new Fiat 500 set to hit the roads, though you’d not know it by looking. While retro small cars from Volkswagen and Mini have evolved noticeably over their first few generations, Fiat has made only detail tweaks to its latest 500.

Given an example of the new model and a lifetime to search for the changes you’d probably struggle to find all 1800 claimed by Fiat. But customers seem to like the current model anyway – they’ve bought 1.5 million of them in the last eight years – so it makes sense not to alter the basic formula too drastically.

Unfortunately, the model most likely to appeal to evo readers – anything wearing the Abarth badge – hasn’t yet been refreshed itself. We’ve reached out to Abarth for confirmation of an updated model and though dates are yet to be confirmed, we know a hot 500 will follow.

For the time being then, the sportiest 500 will be the 104bhp, 0.9-litre TwinAir model. Until the expected Abarth arrives, its 10-second 0-62mph sprint is the quickest time in which you'll reach that particular benchmark, while top speed is 117mph.

It’s joined in the range by an 84bhp version of the same engine (a second slower to 62mph, and 10mph shy at the top end), a 1.3-litre 94bhp Multijet II turbodiesel, and a naturally-aspirated, 68bhp 1.2-litre four-pot.

All are economical, on paper at least. Fiat claims a combined fuel consumption figure of 74.3mpg and CO2 of 90g/km for the 84bhp TwinAir, while the more powerful two-pot manages 67.3mpg.

In our experience, those figures are wildly optimistic, but what the TwinAir lacks in real-world fuel economy it makes up in exuberance and character. You'd be better off with the diesel as ultimate economy is the aim, though you'll have to wait as only TwinAirs and the 1.2 petrol will be available at launch. You might also be on the wrong website... 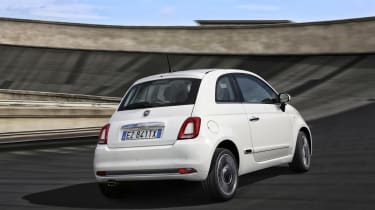 In terms of size, the 500 is identical to the outgoing model – 357cm long, 163cm wide and 149cm tall – illustrating just how little Fiat has changed. Happily, in an age when some city cars seem as heavy as the buses and taxis that surround them, no model in the 500 range weighs more than 940kg.

What the company has done is ‘sensitively refreshed’ the retro styling. The headlights are a little more slanted than before, the daytime running lights are now LED, and the rear light clusters now incorporate an unlit, body-coloured centre section.

Subtle chrome details abound, while a range of new 15in and 16in alloy wheel designs, each available in an array of finishes, should be enough to differentiate the car to the keen-of-eye.

Thirteen paint finishes can be selected, two of which are new. A ‘second skin’ initiative lets drivers customise their cars further, with everything from geometric patterns on the bodywork to tartan and camouflage finishes.

The interior environment has also been lightly revised. There’s a new steering wheel, and from Lounge models upwards an analogue speedometer and tachometer unit makes way for a seven-inch wide TFT display. Messages from the Uconnect infotainment system can also be displayed on this screen.

Front seating is now ‘more ergonomic’ than before, and a bewildering array of different fabrics and trims further extends the customisation factor. If even that isn’t enough, Fiat Chrysler Automobiles’ Mopar brand supplies further accessories, from vintage-style wheel trims to a tailgate rack. 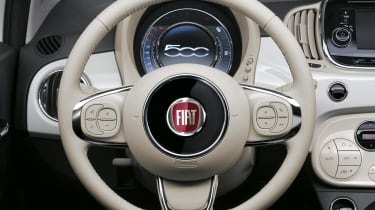 Various options are available: £320 buys 15-inch alloy wheels for the basic Pop, £370 for 16-inch rims and £180 gets diamond-cut alloy wheels for Pop Star and Lounge models. Those feeling flush can spend £740 on a tri-coat 'Urban White' paint finish, or pay as little as £140 for one of the 'second skin' options mentioned above.

The special all-digital instrument display can only be specified on Lounge models, though the £250 bill seems reasonable for a feature normally found on much more expensive cars.

Abarth has remained coy about details, but it has at least admitted something is on its way, we just don't know when. Given that the standard 500 has seen so few visual changes, we can safely predict that the Abarth 500 will receive a similarly light number of aesthetic modifications.

The old car's turbocharged 1.4-litre T-Jet engine is also likely to remain, but whether it'll still produce the same 133bhp in entry-spec remains to be seen. The fastest model, the Abarth 695 Biposte, produced 187bhp from its more powerful 1.4-litre engine. To remain competitive in the increasingly powerful hot hatch segment - even the base Fiesta ST produces 179bhp - we wouldn't bet against the chances of Abarth producing an even more powerful variant.

Though we weren't the biggest fans of the previous model's uncommunicative steering and busy ride, it was at least a strong seller. We therefore expect Abarth to keep the changes to a minimum.