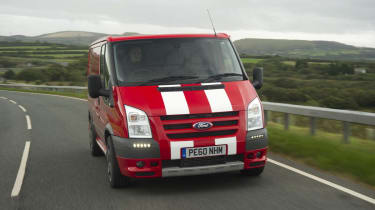 Pictures of the new SportVan on the right. Above is evo's Richard Meaden driving the legendary Formula 1-engined Supervan around Millbrook...

After the success of 2009's Transit SportVan, Ford has launched another limited run as part of the van's 45th Anniversary.

The new Ford Transit SportVan uses the same 2.2-litre TDCi diesel engine, boasting 140bhp and 258lb ft. It's not exactly in the same league as the legendary Supervans of the past, then, but with its ‘Le Mans’ style stripes, 18in alloys, side skirts, front and rear spoilers and twin exhausts it will certainly appeal to the majority of van men up and down the country.

Inside, it gets velour trimmed seats, leather trimmed steering wheel, a six CD changer and a DAB radio with the option of leather seats and sat-nav. Priced at £22,630, just 100 set to be made, making it unlikely you’ll see this particular Transit filling your rear view mirror any time soon.

Ever since Richard Meaden hustled a Transit round the Bedford Autodrome (evo Issue 142), Ford’s legendary load-lugger has been on the evo radar, so a SportVan only heightens our respect for it.