Ford has revealed a new compact saloon, which could see the return of the Escort name in China. 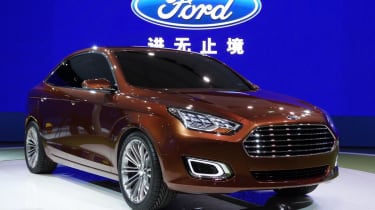 Ford has revealed a new sub-focus small saloon car concept at the Shanghai motor show, which in a slightly unexpected announcement has called the Escort, which has remained unused internationally since 2000.

The concept has been developed by Ford to fill the growing Chinese C-segment, which is dominated by small saloons. The car is almost certainly making it into production, and is planned to go on sale in 2015. There are currently no plans to bring it to Europe .

Taking key styling cues from the rest of the Ford portfolio – including that distinctive grille – the Escort will sit along side the current market leader in China, the hatchback Focus, in search of a further slice of the huge Chinese market.