Radical has launched a new turbocharged version of its road-going RXC at the Autosport International show. Details here 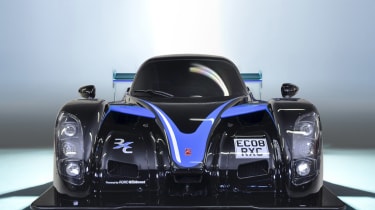 The Peterborough sportscar firm launched the uprated twin-turbo machine on the Ford stand at the Autosport International show at Birmingham’s N.E.C. this week. Powered by the largest engine in the EcoBoost family, which also powered a Daytona Prototype to a Daytona speed record last October, the RXC Turbo produces 454bhp and 500lb ft, with a claimed top speed of 185mph. It’s fitted with a seven-speed Quaife paddle-shift gearbox as well as a pair of FIA-compliant racing seats with six-point harnesses.

Radical chief Phil Abbott was keen to stress that the RXC Turbo would combine performance and durability: 'The EcoBoost technology has turned this car into a world-beater while staying a useable package – the engine in this car is good for 200,000 miles. We’ve changed the intercooling to a water-cooled system and employed some aero modifications to improve the downforce, while the car still meets Euro 5 emissions specs.'