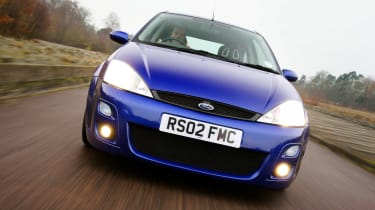 The majority of Ford’s most iconic models have worn the hallowed Rallye Sport badging – often mundane mainstream models elevated to greatness via the ministrations of Ford’s motorsport department and worthy of the RS badge. A succession of Escorts and Sierras made the grade along with coupes such as the Mk1 RS Capris and the standalone RS200 Group B machine.

But in the early noughties the RS moniker had been missing since the demise of the last Escort to wear the badge, the RS Cosworth. Ford’s mid-sized hatch had morphed into the Focus and it was sorely in need of a halo model to appeal to those who wanted a little more pizzazz than the standard Focus offered. The run-of-the-mill Focus already possessed delightful handling and there was no doubt the chassis could handle more. Whether Ford actually gave it a little too much is open to debate.

With a punchy 2-litre engine developing over 200bhp and a chassis with a significant number of revisions over the standard Focus the RS was a machine to be reckoned with, even if it didn’t pack a four-wheel-drive punch like its Impreza and Mitsubishi Evo contemporaries.

No doubt the Mk1 Focus RS will go down on the list of Ford’s all-time greats but there did seem to be quite a wide variance between cars – the first ones we sampled certainly didn’t cover themselves in glory, suffering from rampant torque-steer – and it could be a hard car to drive on a typical British B-road. Find a good one though and you could make good use of its power and balance and there’s no doubting the car’s kerb appeal – the best looking Focus ever made to our mind.

As with many of the icon cars from this period prices are on the up, so grab one now before they’re all squirrelled away in collections. 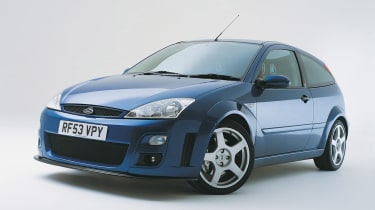 Ford had been campaigning a Focus RS in the WRC and the decision was taken to produce a road-going model to ape the competition version. The car received its first viewing at the Birmingham International motor show in 2000, but it wasn’t until the 2001 Geneva motor show that the production model was revealed in all its glory.

Using the three-door shell (all painted in Imperial Blue) it might have looked like a Focus, but with its blistered arches and aggressive stance it was far removed from the cooking versions. Ford reckoned the Focus RS was conceived and produced in a 15-month period, and while it might not have been developed by the same team fettling the WRC car, it was thoroughly re-engineered with around 70 per cent of the car’s parts being either new or reworked.

At its heart was a 2-litre Duratec DOHC four-cylinder turbocharged engine which developed 212bhp at 5500rpm and 229lb ft of torque at 3500rpm. By today’s standards those outputs are nothing to write home about, but when the RS was new it was more than enough for the front-wheel-drive hatch to handle and good enough for a 0-60mph time of 5.9sec and a claimed top speed of 143mph. 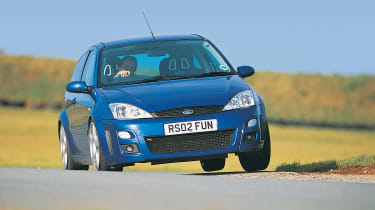 For its Focus RS application the engine went through a number of upgrades. The block had a modified oil return system and fitted to it were pistons whose design aped those of the WRC car, albeit with a lower compression ratio. The standard Duratec cams were retained but forged conrods were fitted to cope with the extra forces they’d be subjected to. A Garrett turbocharger was fitted along with a modified exhaust manifold, a larger bore exhaust system, a revised air intake set-up and a water-to-air intercooler. Further modifications included revised engine management, higher flow injectors along with an oil cooler and a water pump with a 50 per cent improvement in flow.

The Focus’s new-found power was transmitted by a beefed up five-speed manual gearbox with unique gear ratios, a short-shift mechanism and an uprated AP Racing clutch. The challenge of successfully channelling 212bhp through the front wheels was given to a Quaife automatic torque-biasing differential, designed to distribute torque to whichever wheel had the most traction to prevent wheelspin. In operation it was far from seamless on many examples and could make the RS an unruly companion, with the steering wheel grabbing one way or another, especially on bumpy roads.

Further revisions to tame the unruly beast included modified camber settings for the front suspension along with an 18mm front anti-roll bar and a revised steering rack. Dampers were by Sachs and at the rear the multi-link suspension was stiffened, while a sturdier anti-roll bar was installed along with uprated bushes. 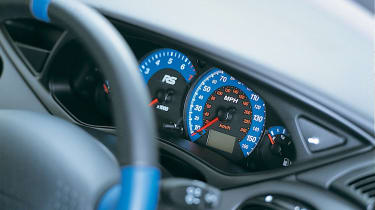 Stopping power came from Brembo 324mm ventilated discs and four-pot calipers up front, while those at the rear were solid 280mm items. Covering the brakes were a set of bespoke 18-inch OZ Racing light-alloy wheels, fitted with 225/40 R18 Michelin low-profile tyres developed specifically for the Focus RS.

While the bonnet, doors, roof panel and tail/headlamps remained standard, every other exterior element was painstakingly developed and honed to help create a car that was clearly identifiable as the hottest of Foci. While WRC styling cues were added, these had to be production items, so the front and rear wings with wide wheelarch extensions were made from metal rather than composites, while reinforced polypropylene moulded front and rear bumpers, side sills and a rear spoiler mounted on the tailgate completed the package.

Inside there was a tricolour – black, blue and silver – theme dominated by a pair of Sparco high-backed seats, trimmed in blue and black leather and Alcantara. The steering wheel was also trimmed in the blue/black combination with a blue marker in the 12 o’clock position, while an aluminium handbrake handle and gearknob, along with Sparco aluminium pedals, were added. Bespoke dials with flashes of blue around the dials’ edges helped to smarten up an otherwise very recognisably Focus dash with its plethora of black plastic finishes.

In total Ford made 4501 Mk1 Focus RS models at its Saarlouis plant in Germany between October 2002 and November 2003, with the UK accounting for the lion’s share of sales, a total of 2147 being sold over here.

‘This was no WRC car for the road, but instead the hot hatch reimagined with all the engineering might Ford could throw at it. A team of 60 worked on the RS for two years and they deemed it necessary to upgrade 70 per cent of the Focus’s basic components for the return of that iconic badge. So while it was never stage-proven, with Sachs dampers, Brembo brakes, a Garrett GT2560LS turbocharger, Quaife torque-sensing limited-slip differential, 25mm lower ride height and 65mm wider track, there was no doubting that the Focus RS meant business. The world really did hold its breath for this car.’ – evo 195

The idea of a 500-horse Focus won’t be for everyone, but for the rest it’s a glorious dose of internal combustion madness
Ford Focus RS500 v Audi RS3 – new v used

One’s an eight-year-old Ford, the other a brand new Audi. But which of these five‑cylinder superhatches deserves your £45k?