Previewing one of Ford’s most anticipated new models in decades, the Bronco R will hit the dunes six months before the production version appears 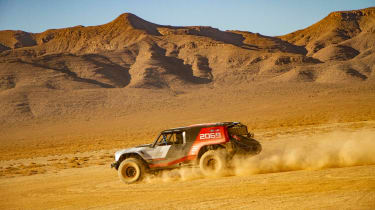 Ford will head to the Baja peninsula later this year to celebrate 50 years since its win at the iconic Baja 1000 back in 1969. In honour of the still-unmatched achievement of winning the Baja 1000 rally raid with an original Bronco, Ford will once again compete with a model of the same nomenclature, one that this time points ahead to the highly anticipated production Bronco that Ford will reveal in 2020.

This racing version is called the Bronco R, and is obviously not an accurate representation of what to expect with the production version. What it will do is point to the aesthetic that Ford intends on following, with a nostalgic take on the 1960s original that has become such an icon. Powering the Bronco R will be a twin-turbocharged EcoBoost V6 petrol engine, although Ford has not confirmed whether it’s the 3.5-litre unit from the current Ford F-150 Raptor, or a new unit that might be revealed in the production Bronco.

The Bronco R then adds independent front suspension and a five-link rear suspension system to the underlying T6 chassis which will be shared with the production version, so too the upright windscreen and squared-off body. The dampers are custom Fox units similar to those found on the F-150 and Ranger Raptors, while the 17-inch bead-locked wheels are wrapped in hefty 37-inch BF-Goodrich off-road tyres.

As for the production Ford Bronco, expect something similar in execution to the Jeep Wrangler – in other words a retro-styled, body-on-frame ‘lifestyle’-type SUV that will share its T6 ladder chassis with the next-generation Ford Ranger. It should also be available in both long- and short-wheelbase forms, with two or four doors, and with solid or removable roof options too. Even more rugged Raptor-like flagship models are also expected. Engine options will ape the turbocharged four- and six-cylinder petrol units found in the current Ranger in the US, where fuel prices and emissions regulations keep these sorts of powertrains relevant, if not ecologically sound.

Unfortunately, the Bronco’s chiefly American-market bias means the business case for right-hand-drive production remains vague at this point, despite the largely Australian-based team who are engineering it. Due for an official reveal in the Spring of 2020, we’ll have to settle for distant glances and an opportunistic hire car choice to get our future Bronco fix.