Ford has released Mountune packages for the Fiesta and Focus ST. 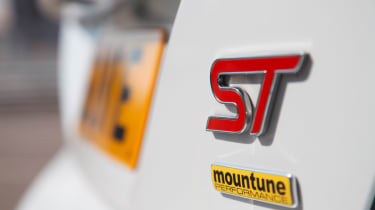 Ford has announced its new Mountune tuning packages for the Focus and Fiesta ST. The Mountune Focus now boasts 271bhp and 295lb ft, while the little Fiesta is pushed from 179bhp to 212bhp – beyond the claimed outputs of the more expensive Renaultsport Clio 200 Turbo and Peugeot 208 GTI.

The Focus gets a new cast alloy inlet duct, high-flow air filter and a larger intercooler, as well as a custom ECU map. As you would expect, performance is improved – with 0-62mph now being dealt with in a less than 6.0secs.

To liberate extra power from the Fiesta, Mountune has fitted a different airbox, along with a secondary air intake to take full advantage of the ECU remap.

Ford charges £599 for the Fiesta ST upgrade, and £1225 for the Focus. Like all Mountune upgrades, The Focus and Fiesta ST are covered under the original Ford warranty, and can be fitted in under 90 minutes (less than an hour for the Fiesta) at any of the 120 Mountune approved Ford dealers in the UK.