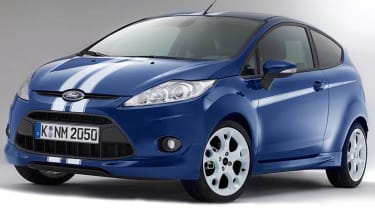 Ford is launching a more powerful Fiesta. The Fiesta Sport+ has been announced for the European market and will likely make its debut at the 2011 Geneva motor show next month. It will be called the Fiesta S1600 in the UK, though, and a Ford insider confirmed that changes between the two will be minimal. Much like 2010’s Ford Fiesta S1600, it’s based on the Fiesta Zetec S, an example of which we’ve ran on the evo Fast Fleet. Happily, it answers our cries for a bit more grunt: the 1.6-litre petrol engine’s power is up from 118bhp to 132bhp while torque rises from 112lb ft to 118lb ft. Modest improvements, but ones which apparently drop the 0-62mph-time by over a second, from 9.9sec to 8.7sec. The top speed subtly climbs to 121mph, up 1mph. The exterior of the Sport+ gains the choice of two colours, Performance Blue or Frozen White, with stripes in the contrasting shade. Front and rear bumpers and size skirts are all mildly tweaked, there’s a twin-pipe exhaust and gleaming white 17in alloy wheels. It looks incredibly similar to the outgoing S1600, so expect the UK car to barely differ. The Ford Fiesta Sport+ will cost 18,090 euros in Germany, which points at a UK price tag of around £15,000. Expect sales to begin in late spring. See the rest of our 2011 Geneva motor show news Read about evo’s Ford Fiesta Zetec S long termer Ford Fiesta v all its small hot hatchback rivals