Ford Fiesta ST-Line review - does the sporty looking Fiesta have any of the ST's spirit? 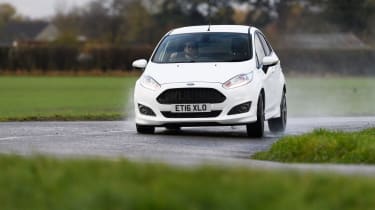 The Ford Fiesta Zetec S no longer exists. But if you were a fan of the sportiest ‘normal’ Fiesta, then don’t worry because it’s been replaced by this, the car you see here, the Fiesta ST-Line. Just like the old Zetec S the ST-Line is powered by Ford’s 1-litre three-cylinder EcoBoost engine or a 1.5-litre diesel and has slightly firmer suspension than the less sporty Fiesta models. There’s also a body kit that makes it look Ford’s proper Fiesta hot hatch, the ST which begins to explains the ST-Line name.

It may have ST in its name, but don’t, not even for a second, think this is a bargain Fiesta ST. The five-door 138bhp version of the ST-Line costs just £700 less than a basic Fiesta ST.

> Click here to read our review of the Ford Fiesta ST

The current generation Fiesta is a relatively humble machine, it makes do with a MacPhearson struts at the front and a torsion beam rear axle. That hasn’t stopped the current Fiesta, no matter what power out-put or trim level, from possessing a poise befitting of a far more sophisticated machine. Each component in every Fiesta feels as though it has been designed and developed closely with one another to create a harmonious drive. And, although this is most apparent in the actual ST, you can feel this attention to detail through the entire Fiesta range including the ST-Line.

The Fiesta ST-Line’s 1.5-litre diesel is only available with 94bhp while there are three different power choices for the 999cc EcoBoost: 99bhp, 123bhp and 138bhp. We tested the most powerful of the three. Ford claims the 138bhp and 155lb ft of torque is good for a top speed of 125mph and a 0-62mph time of 9sec. Hardly spectacular and slightly disappointing from a car that only weighs 1091kg.

The Fiesta feels livelier than the figures imply, though. It isn’t exactly quick, but the engine has real influence even at low revs and it will surge forward without the need to frequently change down gears.

The engine is quiet at low revs, but start to rev it and a distinctly three-cylinder noise makes its way into the cabin. It starts out thrummy then, as the revs rise it takes on a more gravely tone. It’s an odd sound, not conventionally pleasant but it will have an appeal to some. If you don’t like the noise you won’t appreciate the slow, languid way the engine gains revs, subjecting you to every small change in tone and frequency. The engine doesn’t appear too lazy if you do like the noise, instead the soft limiter that gradually slows the revs and holds them at 6,000rpm, becomes the main frustration. It gives the impression the engine is heavily restricted.

The five-speed manual gearbox is the only transmission available. The linkage feels direct while the gate and throw are surprisingly close and short for an ordinary car. However, the movement is clunky and it feels as though the ‘box is cold, you wait for it to warm up and the change to become slicker, but it remains just a little bit too stubborn.

Despite the 17-inch alloy wheels that come standard on the Fiesta ST-Line it rides remarkably well. There’s significant travel to the suspension but thanks to the light body, compressions and sharp crests don’t fluster the Fiesta. It’s significantly more comfortable than the ST, but that has come at the expense of fun. Where the ST is keen and darty, the ST-Line feels cumbersome. Into a corner the pseudo-ST’s centre of gravity seems high, and the body’s lightness completely disappears. It leans into bends and you can feel the rear roll excessively when really pushed. On the exit of a corner, even once the sterring wheel is straight the body seems to pause momentarily before it rights itself.

The steering is clear and direct, though. The ratio suits the Fiesta’s attitude, it’s quick enough to be able to accurately guide it into a corner, but it’s not too fast that the chassis can’t react in time. No matter what you do the body roll absorbs any attempt to inject some life into the Fiesta. You simply can’t to push it into the realms where you can start adjust your line, play with the grip or really properly interact with the ST-Line. You can’t turn the traction control off either, but the chassis doesn’t really present the opportunities for that to be a problem. That security makes it a dependable car that’s safe rather than exciting.

Despite its ‘sports’ suspension, the Fiesta ST line doesn’t exhibit any real athletic qualities. Its complete lack of excitement begins to make a mockery of the slightly aggressive looks. There isn’t the substance and performance to validate the hot hatch visuals; it’s like your elderly Nan wearing a pair of running shoes.

With an amiable engine, a comfortable ride and trustworthy handling the ST-Line does a great job of being a good hatchback. The old Zetec S moniker promised little in the way of sportiness, but the new name brings with it an expectation that some of the playfulness of the ST will be evident. We hoped for an ST chassis with a less powerful engine, but instead the ST-Line feels more like an ordinary Fiesta and it isn’t infused with the same enthusiasm and vigour of Ford’s glorious ST.

> Click here to read our review of the Renault Clio GT

However, despite the new misleading name, the Fiesta is still one of the most enjoyable small hatchbacks to drive. The Renault Clio GT is a similar price to the Fiesta ST-Line. It also follows a similar ethos to the ST-Line, promising some of the character of its hot hatch derivative. The Clio GT has a more focussed chassis than the ST-Line and it feels closer to the proper Renault Sport model than the Fiesta does to the ST. However the GT takes the slow and frustrating paddleshift gearbox from the full fat hot hatch, possibly the worst element of the Renault Sport model.