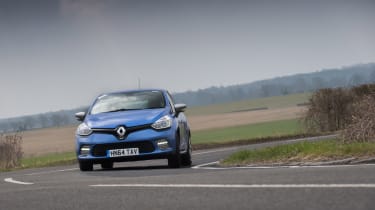 The gulf between Renault’s cooking models and Renaultsport’s output has always been a little confusing. Why can’t the division's engineers inject a little RS fun into humbler hatches?

As badges on the tailgate and dashboard decree, the Clio GT-Line is a supermarket supermini with influence from Renault’s racing arm. But is it an RS-lite, or the work of erroneous badge placement?

Take a look under the bonnet or at the specification sheet, and you might assume the latter.

It does so through a six-speed ‘Efficient Dual Clutch’ transmission – the eagle-eyed will recognise this as the same unit used in the Clio 200 – controlled through paddles on the steering wheel or via the floor-mounted lever.

An RS Drive button lets drivers choose between Normal and Sport driving modes, though the quickest you’ll reach 62mph in either is 9.9 seconds. Combined economy of 54.3mpg is the tradeoff for the tepid on-paper figures. 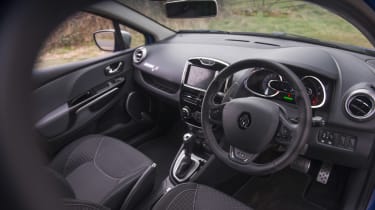 Evidence of Renaultsport’s influence is more apparent in the chassis setup. A ‘sport’ chassis is standard, with 40 per cent stiffer dampers and different bump stops to those of regular Clios.

The RS Drive mode has a similar effect on the car as it does in the Renaultsport – gearchange speed increases (by 30 milliseconds, to 170ms), the stability control system eases its grip on the chassis, throttle response is enhanced and steering assistance is reduced.

The GT’s interior falls somewhere between the RS and standard Clios. There’s a pair of comfortable bolstered seats up front, the leather wheel is much like that in the RS, and there are splashes of chrome and piano black plastic. Outside, GTs are distinguished by 17in alloy wheels, twin tailpipes and RS-style front and rear bumpers.

Disappointing. It’s mainly the fault of the engine – on light throttle openings it feels brisk enough, and throttle response in either driving mode is relatively lively. Gearchanges from the EDC ‘box are smooth too when pottering around.

Step up the pace however, and the GT falls flat. Smooth and eager at low revs, the 1.2 feels limp in the mid-range and downright emasculated as the revs rise. It’s compounded by the apathetic auto, which takes full seconds to select gears when the paddles are tugged, and a wearisome, characterless exhaust note.

Mercifully, Renaultsport’s influence can be felt in the chassis. Like the Clio RS, the steering lacks the tactile feedback of the Megane RS and previous Clios, but it’s nicely-weighted and turn-in is swift and accurate.

There’s good grip too and the car rides bumps as well as any in the class, but from that point on the GT once again frustrates. The Clio’s inherent balance is hard to access thanks to the engine’s lack of power and the elastic gearbox responses, the brakes – drums at the back – lack firmness underfoot and the stability and traction control systems are far too eager to kill the fun, even in Sport mode. 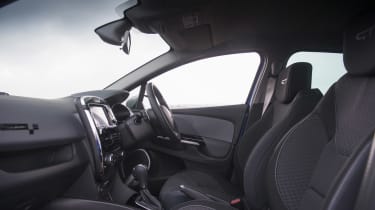 At £17,395, the GT seems rather expensive for a 1.2-litre supermini, but you’ll pay handsomely for the Clio’s rivals too.

At the moment though, the best value is represented by Ford’s Fiesta Red and Black editions. Equipped with a 138bhp version of the 1.0-litre Ecoboost three-cylinder, a manual gearbox and a chassis not far removed from the excellent ST, its £16,145 tag looks like a steal and delivers the sort of interactive driving experience the Clio falls short of.