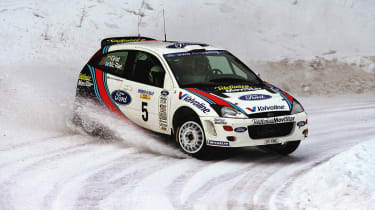 The Ford Focus WRC rally car will shortly enter retirement, and drivers from its 12-year life gathered at Cardiff’s Millennium Centre this week to celebrate its illustrious career. Officially titled the Ford Focus RS WRC, the car will feature competitively for the last time this weekend – November 11 to 14 – when it takes part in the 2010 Rally GB. It will then make way for its smaller Fiesta successor, which takes its place next season due to new rallying regulations. See the Ford Fiesta WRC here.

Road-going Ford Focus RS takes on its rivalsThe Focus has started 173 events over the years, and has been driven by such legends as Marcus Gronholm, Mikko Hirvonen and Carlos Sainz. Not forgetting, of course the late Colin McRae, who made the Martini-clad Focus a bit of an icon. Few cars have had such a long innings at the forefront of the WRC, and it all started back in 1999 when the Focus first appeared at the Monte Carlo Rally. Its maiden victory came in the following month at the hands of McRae in the Safari Rally of Kenya.

VIDEO: evo has a ride in the Ford Focus WRC car The highlight of the following season was a pair of one-two finishes from the Focus, with McRae and Sainz sharing victories. In 2003, the duo initiated a run of consecutive points finishes for the Focus, which now stands at a staggering 131 points-garnering races. 2005 saw the launch of the new Ford Focus road car, and its rallying equivalent appeared accordingly. Toni Gardemeister and Roman Kresta both set fastest times in the new car’s Australian debut.

Road-going Ford Focus RS takes on its rivals It was in 2006 that the WRC Focus really began to earn its plaudits, though, with new signing Marcus Grönholm winning seven times as Ford took the manufacturers’ championship with one event to spare. And the trick was repeated the following season, with eight rally wins contributing to a second consecutive title – a stand-out period in the Focus’ rallying career. It won five consecutive events in 2009 (Ford’s best run thus far in the WRC), and this season has seen the Focus chalk up a record 131st consecutive points finish. So it’s ‘goodbye Focus, hello Fiesta’ for next season. And it’s fair to say that Ford’s baby has some work to do to match the feats of its predecessor.

VIDEO: evo has a ride in the Ford Focus WRC car

Full details and pictures of the 2011 Fiesta WRC