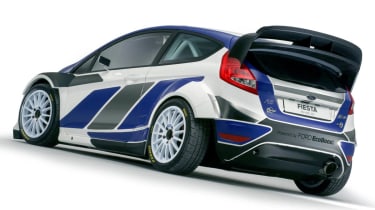 Making its global debut at the 2010 Paris motor show is the Ford Fiesta WRC car, Ford’s entry for the 2011 FIA World Rally Championship.  To ensure compliance with new regulations the Fiesta RS WRC will make use of an all-new 300bhp 1.6-litre turbocharged EcoBoost engine, on which Ford has collaborated with M-Sport and respected French Tuner Pipo Monteur. A four-wheel-drive transmission incorporating a six-speed sequential gearbox will also feature.  This year’s driver lineup of Mikko Hirvonen and Jari-Matti Latvala will be hoping to use Ford’s new challenger to recreate the infamous memories of past Ford drivers Colin McRae and Ari Vatanen in order to build upon the marque’s illustrious motorsport history and re-establish Ford as the premier force in the WRC.  They, and the new aggressively styled car, will have their work cut out to match the Focus RS WRC which won back-to-back manufacturers titles for Ford in 2006 & 2007, victories which have helped Ford become the most successful manufacturer in world championship history with 75 rally wins. The Fiesta WRC will first take to the stages in Rally Sweden, the opening round of the 2011 FIA World Rally Championship, in February