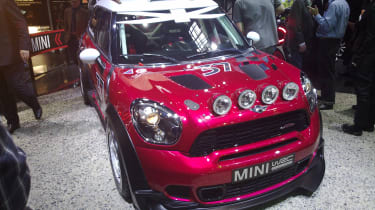 The 2010 Paris motor show saw the three major 2011 WRC cars unveiled, with Citroen, Ford and Mini all taking the wraps off their eagerly awaited cars.

Perhaps the most exciting was the Mini Countryman WRC. Although the car on display was officially a concept it whetted the appetite very nicely with an enormously aggressive front splitter and an extraordinary rear wing. The announcement that 2009 IRC champion Kris Meeke would be driving the car was also excellent news, although David Richards refused to be drawn on who the other driver might be. Richards also stressed that 2011 would be a year for learning and preparing for a full-on assault on the championship in 2012.

The Ford Fiesta WRC was perhaps the least surprising car as its shape has been seen in S2000 guise for all of this season. However it is still a very good looking, well proportioned car and peering through the windows I’m convinced that M-Sport spends more time than anyone else getting everything and everyone as low in the car as possible. Mikko Hirvonen and Jari Matti Latvala are due to begin testing of the complete package at the start of October.

Citroen has the toughest act to follow as its C4 WRC has been enormously successful, taking three (almost certainly soon to be four) championships in the hands of Sebastien Loeb. The new DS3 WRC is shorter, chunkier and altogether more dramatic in appearance. We know that the car has been testing since the summer (albeit with a current 2.0-litre turbo engine rather than the new 1.6-litre turbo engine) so there is every expectation that the French company could continue in its winning ways in 2011 – particularly with Sebastiens Loeb and Ogier behind the wheel…